Artist collaborative plan b makes location-specific works and performances exploring the dynamics of narrative and time. It is composed of artist partners Daniel Rogers and Sophia 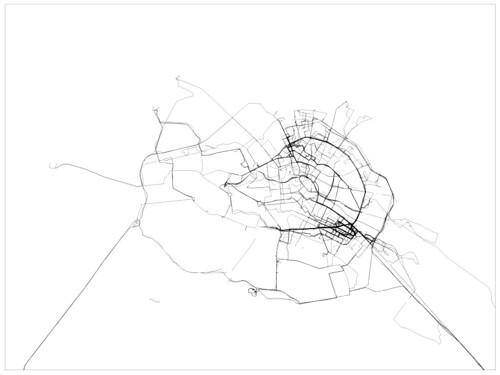 New; Daniel has been carrying GPS trackers with him everywhere since 2003, and Sophia since 2007. They visualize GPS data by translating time-stamped coordinates into lines, and creating time-lapse animations superimposed on maps of their location. These animated visualizations allow Dan and Sophia to discover patterns in the way they move through space and time. Their animation for Berlin, of which the image left is a screenshot, reveals dense straight cords and right angles, representing routes driven daily, and light meandering squiggles, representing walks with their toddler who stops to examine each flower, dog, etc. If Dan and Sophia continued gathering data, they would see the squiggly lines became straighter and darker as their daughter grew up. Essentially, they would see their lives, as manifested in their movement patterns, changing through time.