Can art by accident be bred
And if it were would art be dead?

There is a classic thought experiment made famous by French mathematician Émile Borel, the “infinite monkey theorem“, which states — and I paraphrase — that with enough monkeys pounding away for enough time at enough keyboards (and sustained, presumably, by a large enough supply of bananas and Mountain Dew) that one would would eventually happen to produce the works of Shakespeare.

Clearly there’s a lot of redundancy built into this formula — it’s not a recipe for great art, on the whole, but it is an interesting way to crack open one’s head to accommodate infinity.

Against this backdrop comes veteran Guardian (UK) technology columnist Victor Keegan with a website called Shakespeare’s Monkey which spouts random text in the eventual hope of matching the Shakespearean couplet above. 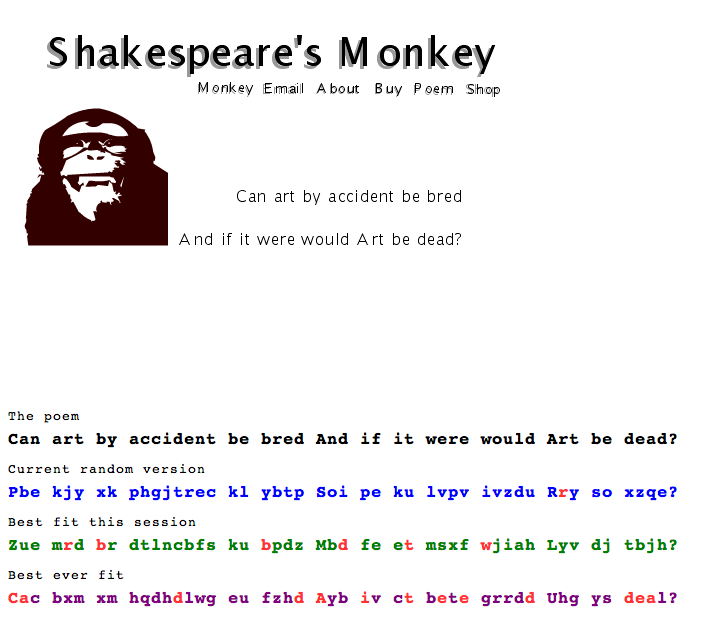 It’s a billion year project, according to Keegan, and so (click “about”) he suggests:

If it doesn’t [happen] in your life time, pass it on to your children.

If you feel we have set the computer too difficult a task, consider what Shakespeares monkeys are thinking as they try to write Hamlet.

It’s a great gimmick, but might benefit from the addition of a few statistics, such as the rate of random line generation, the running time and total number of trials to date, etc.

In any case, Long Now regulars will be familiar with founding board member Brian Eno‘s preoccupation with generative art, described for instance in his SALT presentation with Will Wright, and exemplified by his installation 77 Million Paintings presented in San Francisco last summer.

There seems an interesting comparison to be drawn between the generative art (processes designed to produce unpredictable results, as in 77 Million Paintings) and the probabilistic crapshoot involved in attempting to chance upon a particular configuration which coincides with an existing work of art. The former’s algorithm is crafted to produce endless novelty, the latter to replicate a known result. The former is complex enough to come up with a delightful string of non-trivial surprises, the latter streams out nonsense almost all of the time.

Shakespeare’s Monkey poses — and performs — an interesting two-part question: “Can art by accident be bred / And if it were would art be dead?”

It seems to me that the answer to the first part is a qualified yes. In the hands of an aesthetically as well as technically gifted creator, the conditions for producing art (of varying specific characteristics and qualities, to be sure) can be set in motion. Why a qualified yes? Because, to me, there’s a tension between breeding and accident. Breeding is a form of design — it uses accident in a very deliberate way. So, if you’re designing the breeding process, what’s bred thereby isn’t really accidental.

Now, the second part; does this kill art? I’d say of course it doesn’t. Even where there’s more accident built into the setup (a “dumb” algorithm cycling randomly through letters of the alphabet barely counts as “breeding”) it is recognition of a particular result, against human criteria, that makes it art. The art is revealed as being where it always begins and ends: in the eye of the beholder.

While we wait a few more million years for Shakespeare’s Monkey to hit the right letters, truly generative art (new techniques of cultural breeding) is evolving in leaps and bounds. Eno in 01995:

What people are going to be selling more of in the future is not pieces of music, but systems by which people can customize listening experiences for themselves. Change some of the parameters and see what you get. So, in that sense, musicians would be offering unfinished pieces of music – pieces of raw material, but highly evolved raw material, that has a strong flavor to it already. I can also feel something evolving on the cusp between “music,” “game,” and “demonstration” – I imagine a musical experience equivalent to watching John Conway’s computer game of Life or playing SimEarth, for example, in which you are at once thrilled by the patterns and the knowledge of how they are made and the metaphorical resonances of such a system. Such an experience falls in a nice new place – between art and science and playing. This is where I expect artists to be working more and more in the future.