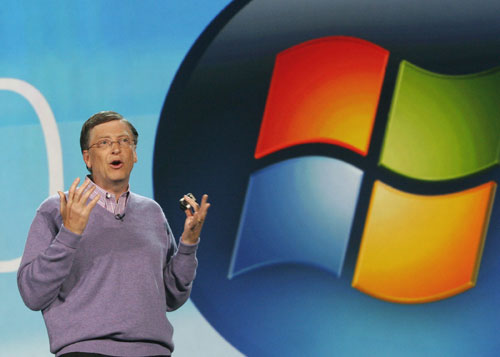 Perhaps the central feature of the Long Now’s Long Bets project is accountability — tracking the fortunes of predictive statements and the arguments made in support of them. In a mediasphere with an attention span as short as ours, pundits, CEOs and other “thought leaders” can get away with a great deal of overconfidence and sloppiness in their future-oriented rhetoric.

Which is why it’s encouraging to see, from time to time, reporters digging into the archives in an effort to evaluate a habitual predictor’s track record. (An earlier example blogged here.)

Bill Gates last night described the home of the future where all the power of the home computer will be available in every room on touchscreens embedded in the furniture.

The vision was one of his annual predictions of future trends in technology at the launch of the 2008 Consumer Electronics Show (CES), which opens today in Las Vegas.

But don’t plan on rushing out to buy the hardware any time soon – the co-founder of Microsoft has been wrong as often as he has been right in his forecasts and in the company products he has touted. Some of the moments he might like to forget include:

1995 Mr Gates launches Microsoft Bob, an attempt to out-Apple Apple with a desktop that looked like a house, and software represented as cartoon characters, such as Java the caffeine-crazed dragon. Gates called it a way to make “the computing experience better”, but the product bombed as it needed twice as much memory as the average PC had back then, so didn’t work on most people’s computers.

2001 He predicts – correctly – that by 2010 there will be a PC in 75 per cent of US homes. But he also said that the most popular form of computer would be the tablet, a handheld device which the user writes on with a stylus. Last year tablets accounted for just 1.2 per cent of all PC sales.

2002 Still fascinated with mobile technology, Mr Gates tells CES that Mira, a wireless monitor for the user to carry about, allowing them to access the internet and music files anywhere in the house, meant that “entertainment will never be the same”. It didn’t catch on because it wasn’t compatible with the home version of Windows XP, couldn’t show video, and cost more than $1,000 a go. It was abandoned in 2004.

2002 The Microsoft boss predicts that Smart Personal Objects Technology (Spot), in which pens, watches, coffee-makers and other everyday items are internet-enabled to allow them to relay information such as weather forecasts and sports scores, would be part of the computing revolution. So far it hasn’t been, though it is beginning to show promise for navigation devices.

In his defence, he has also used CES to launch the XBox in 2001, which is Microsoft’s most successful piece of hardware, and correctly predicted that networked mobile technology would become massively more important.

One thing this points up, I suggest, is that in a sense all business decisions are based on predictions, or can themselves be seen as “bets” — something of value staked on an uncertain outcome. And we need not confine our view to business. Every decision we make is a step into the unknown; a wager made, with whatever quality or degree of forethought, that the ground will hold, or (looking further out) that where we eventually end up will have been worth the trip.

It’s not so hard to perceive the betting going on at the micro-level of everyday decision-making, but the bigger bets we make over the longer term. What’s hard is keeping track of the long, slow layers of decision and change in a culture intent on avoiding the uncomfortable implications of the long view — namely, our longer-term vulnerabilities and responsibilities. That’s the purpose of Long Bets, and the reason why revisiting predictions made over a period of years is so rare, and so welcome.

Yet, although I applaud the systematic evaluation of prominent prognosticators’ predictive histories, it seems to miss the point slightly to evaluate clairvoyance where the “predictions” are underwritten by other, not insubstantial, forms of investment. Gates is not principally a social scientist or a cultural critic, but a businessman, whose job is to actually generate success for his own ventures, rather than dispassionately to predict technological change correctly. There is of course an overlap between being correct analytically and being successful in a business sense — but the point is, being right is not the only issue here. There are other factors at play. Gates’s “predictions” are helping sculpt the expectations (and financial decisions) of millions of people, whether they’re made via the World Economic Forum or the Consumer Electronics Show; they are not made solely with a view to being vindicated or chastised in the press.

Predictions do not occur in a vacuum. (At least, the ones that do aren’t much good to anyone, however well thought out they may be.) When it comes to future-oriented discussion, accountability consists in accepting the consequences of the things we perceive and say (or not) about possible futures: that is, the changes that these discussions and silences actively shape.

For those with billions to lay down on potentially world-changing technologies, there are powerful means available for “predicting” long-term future accountably. For the rest of us, Long Betting may be a good start.