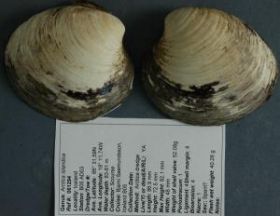 While it can’t compete with 4,000 year-old Bristlecone Pines, a clam that lived for between 405 and 410 years was found in waters off of Iceland by scientists from Bangor University’s School of Ocean Sciences. The researchers can determine the age of a clam by counting the rings of its shell much like the rings of a tree. This one, at just over 400 years old, appears to be the oldest individual animal known to science. Other exceedingly old clams have been found before and the record set by this one could conceivably be beaten in the future, but this particular clam has been verified as the oldest known.

Researchers hope to learn much from these exceedingly hardy little organisms. First and foremost is how they are able to resist aging as well as they do. But also, studying the differences between the rings of the animal’s shell can, like trees, tell us many things about changes in the climate and the environment over the organism’s lifespan.