The cover story from the of the New York Times Magazine this past weekend is entitled “The Future is Drying Up,” an excellent look at the work being done in the near term to cover the population explosion in the American West, as water resources become harder to allocate. It’s definitely worth a read, even if you don’t live in this region which is so dependent on water from so few sources. 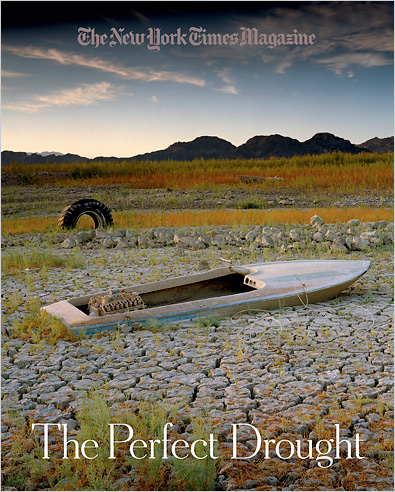 One of the hardest jobs these days must be a Water Manager in the West, trying to make workable the disappearing edge between sustainable resource management and the current- and near-term needs (and unsustainable lifestyle) of the growing population:

“I asked if limiting the growth of the Las Vegas metro area wouldn’t help. [The head of the Southern Nevada Water Authority, Pat] Mulroy bristled. This country is going to have 100 million additional people in it in the next 25 to 30 years, she replied. Tell me where they’re supposed to go. Seriously. Every community says, Not here, No growth here, Theres too many people here already. For a large urban area that is the core economic hub of any particular area, to even attempt to throw up walls? I’m not sure it can be done. Besides, she added, the problem isn’t growth alone: We have an exploding human population, and we have a shrinking clean-water supply. Those are on colliding paths. This is not just a Las Vegas issue. This is a microcosm of a much larger issue. Americans, she went on to say, are the most voracious users of natural resources in the world. Maybe we need to talk about that as well. The people who move to the West today need to realize they’re moving into a desert, Mulroy said. If they want to live in a desert, they have to adapt to a desert lifestyle. That means a shift from the mindset of the 1930s, when the federal government encouraged people to settle in the West, plant water-intensive crops and make it look like the East Coast. It means landscapes of parched dirt. It means mesquite bushes and palo verde trees for vegetation. It means recycled water. It means gravel lawns. It is the Wests new deal, she seemed to be saying, and I got the feeling that for Mulroy it means that every blade of grass in her state would soon be gone.”

It’s also uncanny that this article came out just as the devastating wildfires in Southern California were growing out of control. With houses being built at a rapid pace in arid desert land areas, coupled with the drought scenarios described in the article – fire may shape the future of the region as much as water.

This also reminded me of the excellent Long Now Seminar by Brian Fagan – “Catastrophic Drought is Coming Back”. His talk discusses how we’re not the first to experience these conditions (and far worse – such as 100 years of drought), and puts all of this in to a Long Now context.

Of course there is a more immediate Long Now impact – the issues that Pat Mulroy deals with for Las Vegas water have reached all the way up to 250 miles north to Spring Valley where the Long Now property is.

No blog post about water in the region would be complete without a mention of the great book by Marc Reisner, Cadillac Desert: The American West and Its Disappearing Water. It’s a must-read for anyone interested in the recent history and uncertain future of water resources in the Western United States.