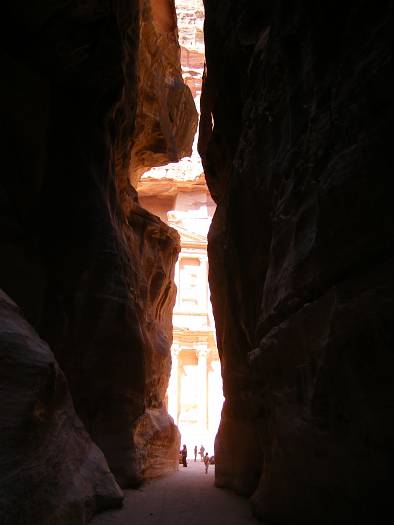 The Siq at Petra

Long Now researchers Danny Hillis, Ryan Phelan, and I left the Davos conference a day early to get more time in Jordan.  The morning of Feb. 2 we left Amman in a van with a driver and a smart black-leather-jacketed guide (Ridhi), headed south toward Petra.

First stop was an old church in Madaba with a stunning wall-to-wall floor mosaic map of the Holy Land preserved from the 5th Century AD by being overlaid by later floors.  It demonstrated that maps are a universal language.  You didn’t have to read the Greek to recognize the Dead Sea, the Jordan River, Jericho, Jerusalem, etc—represented not only positionally but in cartoon form (palm trees for Jericho).

The mosic map at the church in Madaba

Thence to nearby Mount Nebo, where Moses supposedly saw the promised land across the Jordan valley, and died.  More ancient church floor mosaics, too grandly symbolic to decode.

And on to an unpromising-looking crusader castle at Kerak.  It turned out to have levels within levels of spacious undergound passageways, vast and potent.  Danny explained why it met his dream ideas of a castle, whereas European castles always disappoint him (too small, for one thing).  Stone archways, narrow stone stairways, dramatic pools of light from high overhead openings to the sky—this is a mythic vocabulary.

A couple hours blasting across the bleak desert plateau of Jordon, and so to bed at the excellent Movenpick Hotel right at the entrance to Petra. (Mentioned here as recommendation to other travelers.  We also recommend the Guiding Star agency in Amman, who did as well for us as they did for Doug and Tomi a few weeks before.)

We explored Petra for two days, entranced.  As high as the reputation of Petra is, the reality surpasses it.  The great postcard images of the Treasury, the Monastery, the water channels in the Siq (approach canyon) do not convey the main events of the experience, which are:  the sequence of arrival, the overpowering geology (endless towering convoluted rocks), the enormous scale (hundreds of monumental-geological tombs going on for nmiles), and how manifestly yet to be discovered most of the city is. 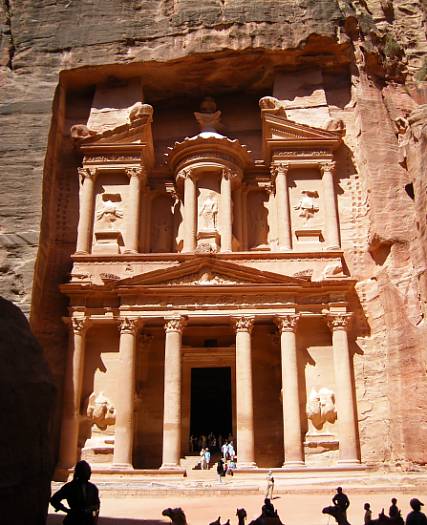 The Treasury at Petra

Design ideas for the desert Clock spoke from every vista and detail.

Thus prepped and taut with anticipation, you enter the Siq—as narrow, high, extravagant, and nervous-making as the slot canyons of the American southwest.  You enter from its top, so the walk is gently downhill—easy, inviting.  It it both a wild canyon and profoundly civilized.  On each side of the narrow flood-sculpted passageway (sometimes 15 feet wide, 200 feet deep) is a waist-high ancient water channel, carved swervingly along the cliff curves.  One was for agriculture, the other for people and animals.
It is conspicuously brilliant hydrology.

There begin to be architectural elements—carved niches almost worn away, bench forms, a watering trough for animals, and—recently discovered—the feet and legs of a realistically sculpted man leading two camels down the Siq, just larger than life size.

You keep anticipating the famous first glimpse of the Treasury framed at the end of the Siq.  When it comes, your camera leaps into your hand. Okay!  Consummation!  Then the surprises begin.

The scale is wrong.  The Treasury is as beautifully shaped, well preserved, and sandy pink as expected, but it is not jewel-like.  It towers WAY up over you.  A day of neck-craning begins.  Inside the large entrance is a vast, perfect cube of space inside the mountain.  The ceiling is not arched but absolutely horizontal, 50 feet by 50 feet.  (If they can do that with sandstone and have it hold up nicely for over 2,000 years, we can do it with limestone.)

The Treasury is amazing, a revelation.  Without the Siq it would be merely impressive.  Danny may have some things to say about the lessons of the Siq.

The city begins, first a lengthy necropolis of tombs in the widening canyon, then signs of the once-living metropolitan area of 30,000 people. The tombs vie with each other for massiveness, reaching far up the mountains on each side, crowding and overlapping—a teeming, overpopulated necropolis.  (Lesson: nobody should be buried at the desert Clock, because once that begins, in time the dead take over.)

The fantastic natural rock landscape is so extensively carved, and so much of the carving is so eroded that it looks natural, your eyes can’t stop examining every rock surface near and far, parsing artificial from natural and delighting the more in both.  All is gaudy.  All is subtle.  (All is Gaudi.)

There are amenities, provided by resident Bedouin children and adults—coffee, camel rides in the canyon, burro rides to the peaks, some books (purveyed by a New Zealand lady who married into the Petra Bedouin). Past ever grander tombs, a Roman colonnade, a Byzantine church (discovered in 1992), a huge free-standing temple, is lunch and a museum.

Pluckily, we climbed another spectacular canyon, steep this time, to the high and distant Monastery tomb.  In the distance on a high peak we could see the modest, mysterious shrine to Arum, brother of Moses, said to be buried there.  Danny liked the remote look of it.  Ryan flirted with an entire campfire of dashing Bedouin men keeping warm from the chill drizzle.

It was a long three mile walk back to the hotel.

The first day was heroic, the second easy and contemplative—hanging out with Petra.  It rewards that (and the Clock should).  Ryan gleefully rode a camel, not just for photos but to get around.  We sat in the high tombs and admired the view from them.  We found tombs that scared us off (“Too deep, too dark, too many buried”).  We clambered and explored some of the countless, countless stone-cut steps that ascended everywhere.  Steps in living rock are an invitation and a joy.

We drank coffee, watched the passing show from the perspective of the Bedouin residents, and waxed philosophical.  There were layers and layers of nuances to notice.  Petra let us know it was inexhaustible.

Strolling now, we eased back to the hotel for a drive to “Little Petra” a few miles away.  It was an ideal finale, because that little canyon was the fountainhead of the whole Nabatean complex—a hydrological masterpiece of water channels, stone stairways, huge echoing cisterns, and dwelling caves. Petra is humanity’s greatest hymn of water and rock.

It came to life that evening at the hotel with an hour’s conversation with a Mr. Hani Falahat, from the Petra Trust and Department of Antiquities. The lead researcher of Petra’s hydrology, he has also been proving that the local Bedouin clans in the region are the direct descendants of the builders of Petra.  He himself is one.  We were having coffee with a Nabatean.