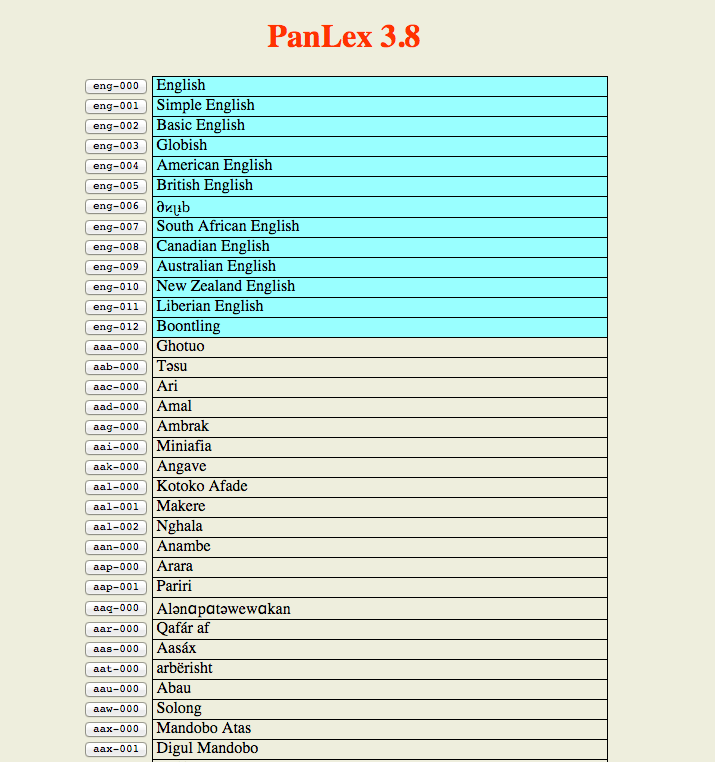 How many autoglossonyms do you know? Presumably, “English”; probably “español”, “français”, and “Deutsch”; perhaps “русский”, “日本語”, “עברית”, or “हिंदी”.

As you may have guessed, an autoglossonym is the name of a language in that language. While most people know a few of them, PanLex, as a Long Now project, aims to discover and document all of them that can be found, all the way into the farthest corners of the world and the remotest eras in time.

PanLex has amassed facts about words in nearly 10,000 language varieties (languages and their dialects). PanLex prefers to use autoglossonyms in naming language varieties; so far we have collected about 9,000, which we believe to be the largest such collection in existence. In some cases we find phrases that mean “language of the X people” or “language of X region” or “our language” used as autoglossonyms. But in about a thousand cases the PanLex team has not yet found autoglossonyms of any kind, and then we substitute exoglossonyms—names used by outsiders.

Finding autoglossonyms is hardest for extinct languages, languages of small groups, and obscure dialects. For example, PanLex has documented eight varieties of Shoshoni, a Uto-Aztecan language of Nevada, Idaho, Wyoming, and Utah, and for three of these we haven’t found autoglossonyms. Our database contains over 2,600 expressions in Big Smokey Valley Shoshoni, but we still don’t know its autoglossonym. It’s possible that speakers of this variety did not have a name for it, or the name has never been recorded. The search continues.

Using exoglossonyms when autoglossonyms are not available can be a delicate issue. As with names for racial and ethnic groups, names that outsiders give to languages are sometimes considered offensive by the people whose languages are being labeled. The words “Lapp” and “Hottentot”, for example, are generally recognized as pejorative terms for the Saami and Nama languages, respectively. But in many cases a non-native speaker would not recognize a language name as pejorative (for example, “Ngiao” for Shan and “Quottu” for Eastern Oromo).

Autoglossonyms can often be found in the documentation produced by other projects, including Ethnologue, Geonames, Lexvo, and Wikipedia. We use data from all these projects, and we make our data available to them in return.

You can see PanLex’s labels for language varieties on the home page of the expert PanLex interface. If you see any autoglossonyms there that you know to be incorrect, or exoglossonyms that you can replace with autoglossonyms, please notify info@panlex.org.