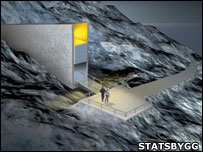 A little while ago the design for the Svalbard International Seed Vault was released (BBC article).  They are building a long term vault for seed stock preservation.  Interestingly they seem to have chosen the site mainly under the assumption that the planet will only get warmer in the next 200 years.  My understanding of the Gulf Stream dynamics is that if the Greenland ice sheet calves off, and shuts down the Gulf Stream, it is also likely that the North Atlantic will be plunged into an ice age, burying the seed vault under a lot of ice…

This article was forwarded to me by Paul Saffo who also points out another interesting fact about the location chosen in terms of long term preservation strategies:

Spitzbergen (one of four islands in Svalbard where the vault will be) is very unusual, though it is Norwegian Territory, it is actually an international ‘condominium’ with approx 12 nations having rights for commercial exploitation on the islands.  It thus mirrors the sentiment that led to the notion of “The common Heritage of Mankind” in the (mostly) failed Law of the Sea Treaty.  Anyway, I find the status interesting because building archives on land owned by many parties is an interesting preservation strategy.