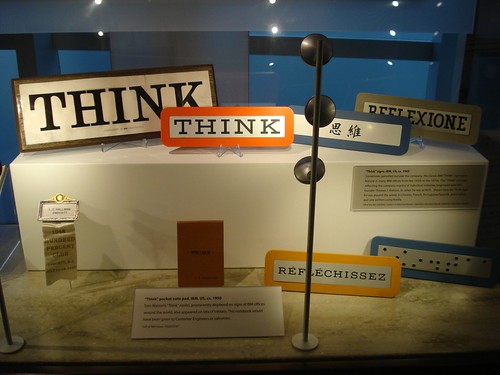 The Computer History Museum’s newly re-designed main exhibition, Revolution: The First 2,000 Years of Computing, is now open to the public. Starting with the abacus and ending with social networking, the exhibit traces our ongoing attempts to mechanically and digitally keep track of our world. In between the two is a history marked by exponential increases in power, performance and ubiquity. Being the largest collection of computers and computer ephemera in the world, that history is documented in extensive, stunning detail in this exhibition with lots of new supporting materials and documentation to tell the story.

Revolution is laid out in a wandering pathway that encourages you to follow along more or less chronologically, but with enough branching and looping back to make you feel like you’re choosing your own adventure and not just moving through a series of individual rooms. During the course of walking through the collection, the space expands along with the growth in applications so that census-tabulators and payroll-calculators dominate the first few areas, giving way to appliance-like mainframes, rocket guidance systems, early storage and software until it explodes into the modern diaspora of music, art, movies, games, robots and artificial intelligence, smartphones and laptops, the web, and social networking. All along the way are original artifacts, recreations, video interviews and documentary clips providing a rich, informed, multimedia story of creative and obsessive geeks’ toys and the myriad ways they’ve changed the world.

The Museum is normally closed on Mondays, but for the Martin Luther King Jr. Day Holiday, they’re open from 10am to 5pm.

The slide-show below includes some shots from a visit earlier this week. Don’t miss Long Now co-founder Danny Hillis and his Connection Machine.