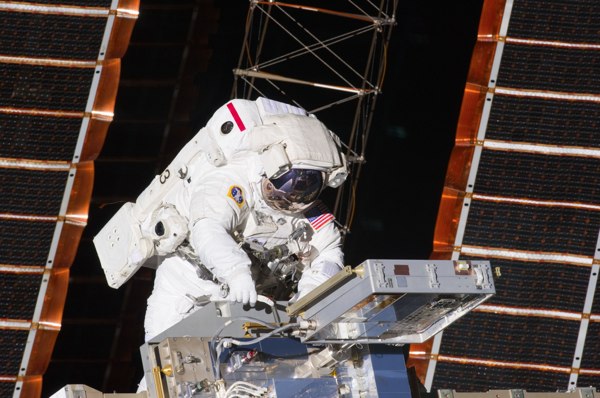 Back in 02009 through a partnership with Applied Minds, and in turn the Air Force Research Lab (who generously invited us to include a sample), we sent one of our Rosetta materials on an experiment called MISSE-7 (pronounced “missey”), which flew on the International Space Station.  This experiment is a shorter term version of the material research begun in 01984 with the Long Duration Exposure Facility.  We sent a sample of commercially pure titanium, that was black oxide coated, and laser marked (pictured below left). This is the same material and oxide process that was used to create the front of the original Rosetta Disk. However we used a much lower power laser than was used on the Rosetta disk so the marking was not very deep.  The sample was just returned to us (below right) after its stint outside the ISS and looks no worse for wear at all except for a slight fade in the clarity of the etching. 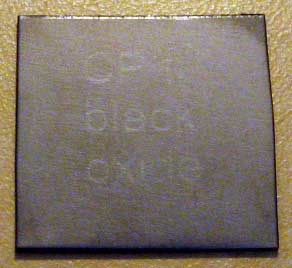 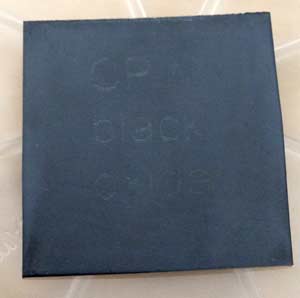 This marks our second space rated Rosetta Disk material,  the first one was the nickel material that is currently on the ESAs Rosetta Mission.  Below is all the info I have found out about the MISSE-7 mission so far.  I am trying to locate the section of the EVA videos where the experiment gets installed and removed.  Any help is appreciated.

RETREIVAL:
MISSE-7 removed during EVA 1 on Shuttle Endeavors last mission STS-134.
Timelapse CG Video and description, opens with MISSE 7 Some great shots of it on the ISS: