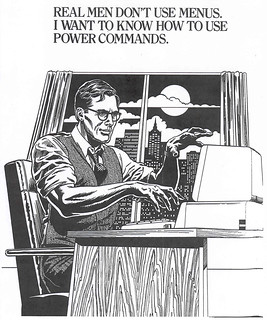 *An old VisiCalc ad from the early 80’s.

The Digital Dark Age beacon has been flashing lately with some renewed frequency. It seems that articles on the pitfalls and challenges of preserving our digital “stuff” are starting to find their way back into the mainstream media. Most recent and notable of these is Kari Kraus’ op-ed piece in the New York Times, “When Data Disappears.” The most salient thing that Kraus points to in this piece is the formation of specialist communities and their role in the preservation of video games.

When I first met Kevin Kelly, he told me of his notion that no technology will ever become obsolete because there will always be someone or some enthusiast community that will put energy toward the preservation of even the most obscure thing. He famously told Robert Krulwich of NPR that, “there is no species of technology that has ever gone globally extinct on this planet.”

What he is saying is that there will always be some force of human compulsion or need that emerges to buoy the inventions of our race. This is important. It is this notion of emergence that will help save us from our dreaded digital dark age. What I find myself doing now is trying to envision the existence of Visicalc enthusiast clubs or a group for any of the tens of thousands of digital file formats that have surfaced over the years. I can almost see it. It doesn’t seem totally infeasible to me, but part of me worries that some of these technologies just aren’t sexy enough to be embraced in the same way that old video games are. I wonder, too, about the scalability of Kelly’s idea. As the production of new technology gets faster, will there be enough human interest to sustain the preservation of ALL of it?

Time will tell and I am certainly betting on the hope that there will.