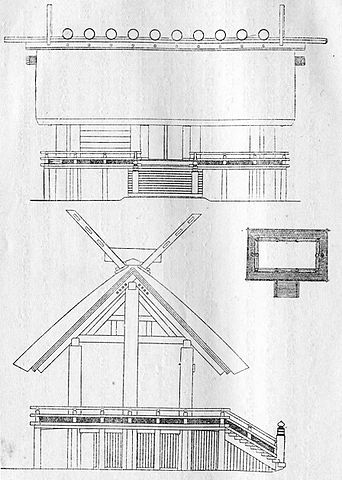 Long Now Executive Director Alexander Rose, also the Project Manager for the 10,000-Year Clock, collects inspiring examples (or in some cases, failures) of long-term thinking, architecture and design. In a talk called Millennial Precedent, he discussed some of these examples and the lessons he draws from them. Among them is a Japanese shrine in the city Ise.

Established an estimated 2,000 years ago, the shrine’s name “Jingu” literally means simply “the shrine.” Few structures on the planet can claim to have stood as long as Ise’s shrine, but the way it has managed to edure is singular. Rather than being constructed at monumental scale, or of immutable materials, the modest thatched-roof and wood structure is ritualistically rebuilt every 20 years. It’s secret isn’t heroic engineering or structural overkill, but rather cultural continuity.

02013 is a reconstruction year and the Shikinen Sengu ceremony marks this milestone. Alexander Rose will attend and share his experiences on our Twitter feed.

This essay by Junko Edahiro provides some great background on the shrine’s origins and long life:

The main sanctuary buildings follow the style of grain warehouses in the Yayoi Period (about 300 BC to 300 AD), which were used to store seed rice for next year and food in case of famine. Should these stocks run out, it would cause serious disruption, so grain warehouses were vital for protecting the people’s lives.

This kind of grain warehouse was normally supported by more than a dozen pillars sunk directly into the ground and had a thatched roof. A great deal of rain usually falls in Japan’s early-summer monsoon, and as the thatched roof absorbs rainwater it becomes heavier. The heavy roof presses down on the walls, and this closes gaps between the wall boards, keeping the inside dry. In summer, the roof dries out and becomes lighter, allowing air to pass through the building and this also keeps it dry. Thus, the roof and pillars function together like a living organism to securely protect the seed rice from moisture and pests.

The only way to support a thatched roof designed to increase in weight is to set the pillars directly into the ground. However, with this method, the pillars and the thatched roof eventually start to rot. Thus, the inevitable solution was to reconstruct these warehouses every 20 to 30 years. However, the life-giving seed rice could not be protected if the rebuilding process started only after the old warehouses could no longer be used. Thus, periodic reconstruction of these structures probably became customary, leading eventually to the Sengu ceremonies of Jingu Shrine in Ise, symbolizing buildings that protect life.