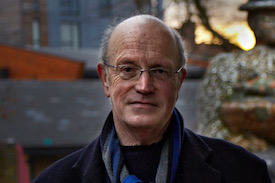 Iain Sinclair (left) chose Alan Moore as the recipient of his Longplayer letter.

In June 02017, the Longplayer Trust initiated a new correspondence, beginning with Iain Sinclair, a writer and filmmaker whose recent work focuses on the psychogeography of London, writing to graphic novel writer Alan Moore, who will respond with a letter to a recipient of his choosing.

The discussion thus far has focused on the extent and ways government and technology can foster long-term thinking. You can find the previous correspondences here.

We are being invited, by means of predatory technologies neither of us advocate or employ, to consider ‘long-term thinking’. But already I’m coughing up the fishbone of that hyphen and going into electroconvulsive spasms over this requirement to think about thinking – and at a late stage in my own terrestrial transit when I know all too well that there is no longterm. The diminishing future, protected by a feeble envelope of identity, has already been used up, wantonly. And the past was always a looped mistake plaguing us with repeated flares of shame. Those smells and textures, wet and warm, cabbage and custard, get sharper even as our faculties fail. I pick them up very easily by fingering the close-planted acres of your Jerusalem. The first great English scratch-and-sniff epic.

“And now,” as Sebald said, “I am living the wrong life.” Having tried, for too many years, to muddy the waters with untrustworthy fictions and ‘alternative truths’, books that detoured into other books, I am now colonised by longplaying images and private obsessions, vinyl ghosts in an unmapped digital multiverse. This is the fate we must accept, some more gratefully than others, before we let the whole slithery viscous mess go and sink into nothingness.

“Unexplained but not suspicious,” they concluded about the premature death of George Michael. They could, just as easily, have been talking about his life. About all our lives.

I remember Jeremy Prynne, when I first came across him, being affronted (and amused) by a request from a Canadian academic/poet for: ‘an example of your thought’. ‘Like a lump of basalt,’ he snorted. Reaching for his geological toffee-hammer. Thinking was something else: an energy field, a process that happened outside and beyond the will of the thinker. Like snow. Or waves. Or television. And with the unstated aim of eliminating egoic interference. A solitary amputated ‘thought’, framed for display, would be as horrifying as that morning radio interlude when listeners channel-hop or make their cups of tea: Thought for the Day. Hospital homilies with ecumenical bent for an immobile and chemically-coshed constituency.

But I do think (misrepresent, subvert) about a notion you once expressed: time as a solid. ‘Eternalism’ as a sort of Swedenborgian block – like a form of discontinued public housing in which pastpresentfuture coexist, shoulder-to-shoulder: legions of the persistent and half-erased dead, fictional avatars more real now than their creators, the unborn, aborted and nearly-born, and the vegetative buddhas on hard benches, all whispering and jabbering and going about their meaningless business. Each of them invisible to the others. Probably in Northampton. Probably in a few streets of Northampton. Your beloved Boroughs. Which are also burrows (and Burroughs). They are hidden in plain sight in that narcoleptic trance between slow-waking and swift-dying, adrift in the nuclear fusion of dusk and dawn. In moving meadows by some unmoving river. They sweat uphill on arterial roads: tramps, pilgrims, levellers, ranters, bootmakers, working mothers festooned with infants, prostitutes, immigrants, damaged seers and local artists, incarcerated poets and skewed uncles around a snooker table in some defunct and cobwebby Labour Club. And all the ones who are still waiting to become Alan Moore.

“The living can assist the imagination of the dead,” Yeats wrote in A Vision. I started my journey through London with that sentence and I’ve never got beyond it. The ambition remains: to be ventriloquised, tapped, channelled. “Life rewritten by life,” as Brian Catling puts it. Longterm is a deranged Xerox printer spewing out copies of copies, until the image is bleached to snowblind illegibility. Examine any seriously popular production, any universally endorsed philosophy, and you can peel it back, layer by layer, to some obscure and unheralded madman in a cluttered cabin, muttering to himself and sketching occulted diagrams of influences and interconnections. Successive reboots bring the unspeakable (better left in silence) closer to the ear, a process infinitely accommodated now by the speed of the digital web. Where nothing is true and none of it matters. And you finish with Donald Trump. Ubu of the internet.

“The illusion of mortality, post-Einstein,” you say. The neighbourly undead patrol their limitless limits: “soiled simultaneity.” That pregnant now in which the past is struggling to suppress its dreadful future. To escape the cull of gravity.  I have never been able to deal in abstractions. I like detail, glinting particulars. Anecdotes.

After noticing uniformed kids tramping, every morning, to their flatpack Academy by the canal, infested with hissing earworms, Nuremberg headphones, tablets held out in front of them like tiny trays of cocktail sausages, I registered a boy and a girl talking very quietly, not wanting to break the concentration of an older girl – who is reading as she walks: James Joyce. And, at the same time, under a Shoreditch railway bridge, there appeared, above a set of recycling bins (‘Trade Mixed Glass’), a portrait of the Ulysses author, with one blackened lens and an unnecessary title: REBEL. Which set me ‘thinking’ about your Jerusalem and the way you tap Lucia Joyce, or recover the aftershock of her Northampton confinement by total immersion in the Babel of Finnegans Wake. Your speculative punt calls up the Burroughs notion of the ‘image vine’: once you have committed to a single image (or word), the next one is fated to follow. By the time of those methadone-managed twilight years in Kansas, Burroughs had exorcised the demons that made him write, the karma of shooting his wife in Mexico City. He used up the days that were left in attending to his cats, making splat-art with his guns and recording his dreams.

“Couldn’t find my room as usual in the Land of the Dead. Followed by bounty hunters.” Postmortem, Bill is still looking for trigger episodes. “It seems that cities are being moved from one place to another.” The Place of Dead Roads, he calls it. And in Jerusalem, you catch very well those freaks of random, punctured illumination. “Each vital second of her life was there as an exquisite moving miniature, filled with the most intense significance and limned in colours so profound they blazed, yet not set in any noticeable order.”

My hunch is this: that Eternalism, the long-player’s ultimate longplay, is located in residues of sleep, in the community of sleepers, between worlds, beyond mortality. I dreamed my genesis in sweat of sleep. There was a dream, one of a series, that I failed to record, but which felt like a reprise of aspects of that film with which we were both involved, The Cardinal and the Corpse. So many of the cast are now dead, locked up, disappeared, but still in play, their voices, their persons, that they secure territory (and time), a privileged past. We were in the Princelet Street synagogue, climbing the stairs (as you did in that house with the peeling pink door), towards an attic chamber that was also a curtained confessional box. With Chris Petit, obviously, as the hovering cardinal (actually a madhouse keeper from Sligo). We managed a ritual exchange of velvet cricket caps before the world outside the window started to spin, day to night, years to centuries, stars going out, suns born, like The House on the Borderland. Martin Stone, laying out a pattern of white lines on his black case, told us that he had just found, in an abandoned villa outside Nice, a lavishly inscribed copy of the first edition that once belonged to Aleister Crowley. But he had decided it to keep it.

If the integrity of time breaks down, place is confirmed. I’m thinking about the Northampton Boroughs, about your friend and mentor, Steve Moore, on Shooter’s Hill. And how Steve sourced the dream of what would happen, his abrupt transference, while sticking around, polishing the Japanese energy shield, long enough to confirm his own predictions, and to allow others to appreciate the narrative arc of his death. That long, long preparation – in vision and domestic reality – you describe in City of Disappearances.

The trick then, the quest we’re all on, is to identify and honour those neural pathways: the trench you print out in Jerusalem, worn by steel-shod boots, between Northampton and Lambeth. The fugue of movement. A man who is here. Who vanishes. And reappears. Is he the same? Are you? Something carries this walker, like John Clare, out on an English road: foot-foundered, gobbling at verges, sleeping in ditches. In the expectation of reconnecting with an extinguished muse: youth, innocence, desire. That is the only longplay I have encountered: one journey fading into the next. No thought. No thinking. Drift. Reverie. As you say, ‘Panoramic portrait over lofty landscape.’ Every time.

Iain Sinclair was born in Cardiff. He left almost immediately. He has lived and worked around Hackney for almost 50 years, but the local terrain is a strange and enticing as ever. Books – including Lud Heat, Downriver, London Orbital, American Smoke – have been published. And there have been filmic collaborations with Chris Petit and Andrew Kötting, among others. Sinclair has recently completed The Last London, the final volume in a long sequence.
Alan Moore was born in Northampton in 1953 and is a writer, performer, recording artist, activist and magician.His comic-book work includes Lost Girls with Melinda Gebbie, From Hell with Eddie Campbell and The League of Extraordinary Gentlemen with Kevin O’Neill. He has worked with director Mitch Jenkins on the Showpieces cycle of short films and on forthcoming feature film The Show, while his novels include Voice of the Fire (1996) and his current epic Jerusalem (2016). Only about half as frightening as he looks, he lives in Northampton with his wife and collaborator Melinda Gebbie.