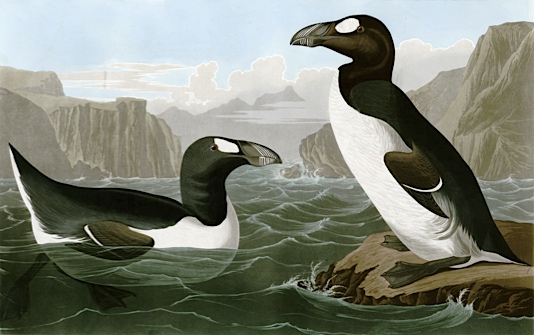 On June 25 and 26, 2015, a meeting was held at the International Centre for Life in Newcastle, England, to discuss whether the extinct Great Auk–a once-common flightless pelagic bird known as “the penguin of the north”–might be a realistic candidate for bringing back to life using recent breakthroughs in genetic technology.  Twenty-two scientists and other interested parties gathered for the event.

Until its final extinction in 1844, the Great Auk (Pinguinus impennis) ranged across the entire north Atlantic ocean, fishing the waters off the northern US, Canada, Iceland, and northern Europe, including the coast near Newcastle in northern England.  The size of a medium penguin, it lived in the open ocean except for when it waddled ashore for breeding on just a few islands.  There its flightlessness made it vulnerable to human hunting and exploitation for its down that reached industrial scale.  Attempts to regulate the hunting as early as the 16th Century were fruitless.  The last birds, on an island off Iceland, were gone by 1844.

The host of the Great Auk meeting was Matt Ridley, member of the House of Lords, former science editor of The Economist, author of The Rational Optimist and Genome.  He opened the meeting by noting that de-extinction comes in four stages, which he described as: 1) In silico (the sequencing of the full genome of the extinct animal into digital data); 2) in vitro (editing the important genes of the extinct animal into living reproductive cells of its nearest living relative; 3) in vivo (using the edited reproductive cells to create living proxies of the extinct animal); and 4) in the wild (growing the proxy animal population with captive breeding and eventually releasing them to take up their old ecological role in the wild.) 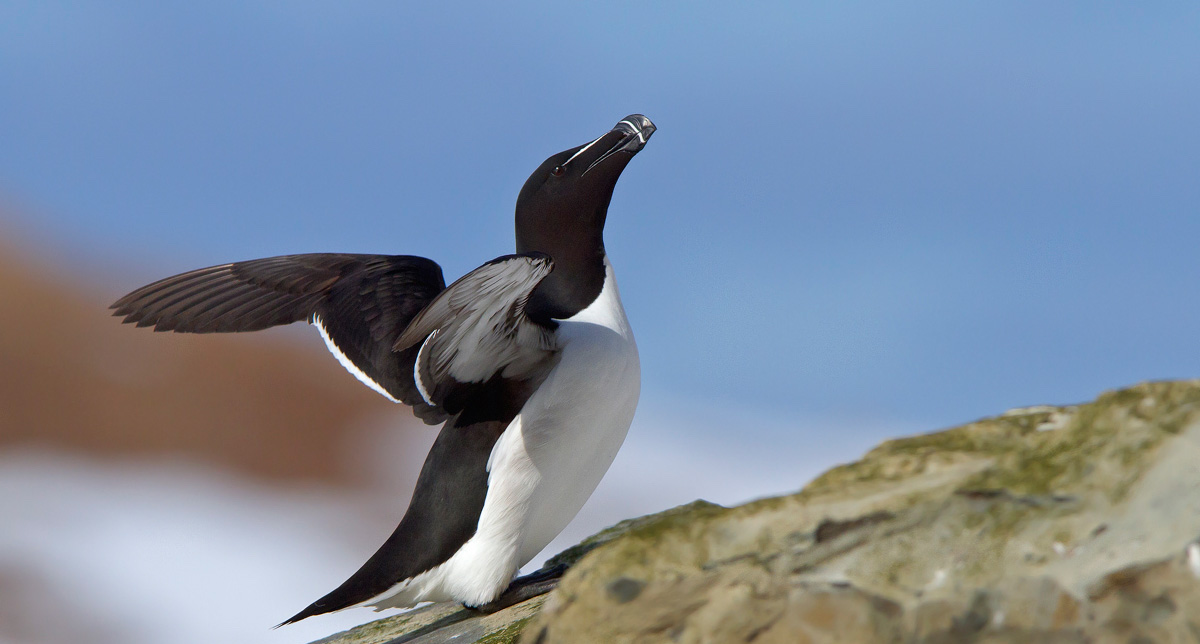 The nearest relative of the Great Auk is the Razorbill (Alca torda, above).  It looks similar and has the same trans-Atlantic range and feeding habits, but it can fly and is about 1/8th the size of the Great Auk.  At the meeting, Tom Gilbert, an ancient-DNA expert at the Centre for Geogenetics, University of Copenhagen, reported on his preliminary sequencing of the Great Auk and Razorbill genomes, confirming that they are genetically close.  There are a number of Great Auk museum specimens to work with—71 skins, 24 skeletons, 75 eggs, and even some preserved internal organs and ancient fossil remains.

Three participants from Revive & Restore—Ben Novak, Ryan Phelan, and Stewart Brand—spelled out the current state of de-extinction projects involving the Passenger Pigeon, Heath Hen, and Woolly Mammoth. In each case the extinct genomes have been thoroughly sequenced, along with the genomes of their closest living relatives, and some of the important genes to edit have been identified.  With the woolly mammoth, 16 genes governing three important traits have been edited into a living elephant cell line by George Church’s team at Harvard Medical School.  For birds, the crucial in vivo stage of being able to create living chicks with edited genomes utilizing a primordial germ cell (PGC) approach has yet to be fully proven, though work has begun on the process, working with a private company in California.

Michael McGrew from Roslin Institute in Edinburgh described the current state of play using primordial germ cell techniques with chickens.  Progress may go best by introducing the edited PGCs into the embryos of chickens adjusted to have no endogenous germ cells of their own.  Because so much work has been done on chicken genetics, working with a bird in the same family, the extinct Heath Hen, may offer the most practical first case to pursue.  For the Great Auk eventually, a flock of captive-bred Razorbills will be needed to supply embryos for the PGC process.

Oliver Haddrath (Ornithologist at the Royal Ontario Museum) and Richard Bevan (Ecologist at Newcastle University) described what is known of the lifestyle, ecology, and history of Great Auks compared with Razorbills, and Andrew Torrance (Law professor at the University of Kansas) examined potential legal hurdles for resurrected Great Auks and found them not explicitly prohibitive and potentially navigable.

The meeting concluded with a sense that the project can and should be pursued.  Next steps include funding the completion of Tom Gilbert’s genetic study of Great Auks and Razorbills and scheduling a follow-up meeting in the summer of 2016, perhaps at another location (Canada, Iceland, Denmark) in the once-and-perhaps-future range of the Great Auk. 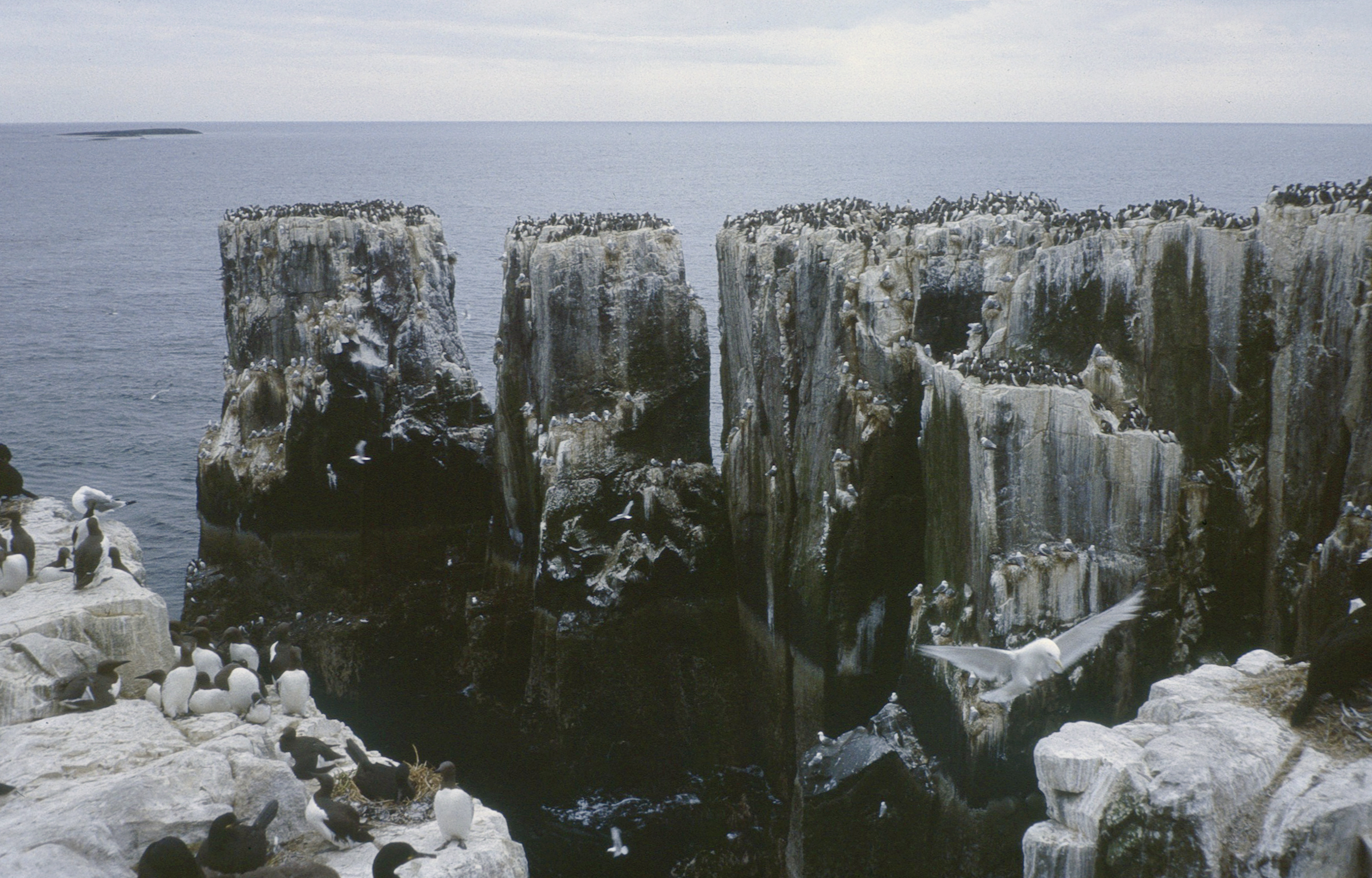 Matt Ridley added the following about the Farne Islands:

The Farnes are one of the very few island groups on the east coast of Britain, so they are very attractive to island-nesting seabirds. They host about 90,000 breeding pairs of seabirds each summer: mainly puffins, guillemots, razorbills, kittiwakes, black-headed gulls, herring gulls, lesser black-back gulls, Arctic, Sandwich and Common terns, shags, cormorants, eider ducks and fulmars. About 2000 grey seal pups are born on the islands each autumn.

The number of breeding birds has approximately doubled in 40 years, largely thanks to protection from human disturbance, control of the predatory large gull population, and habitat management. Most of the birds depend on just one species of fish to feed their young: the sand eel. The eels lives in vast shoals over the sandy sea floor close to the islands. Some studies have suggested that nutrients from human activities on land — including agricultural fertiliser and human sewage — have contributed to the productivity of this part of the North Sea, though treated sewage effluent outflow to the sea has now ceased. It is likely that there are more breeding birds on the Farne islands today than for many centuries, because in the past people lived on the islands (as farmers or religious hermits), and visited them to collect eggs and chicks for food. There is archeological evidence that great auks lived here in the distant past, but they would have been quickly exterminated by people on islands so close to the shore, being so easy to catch.