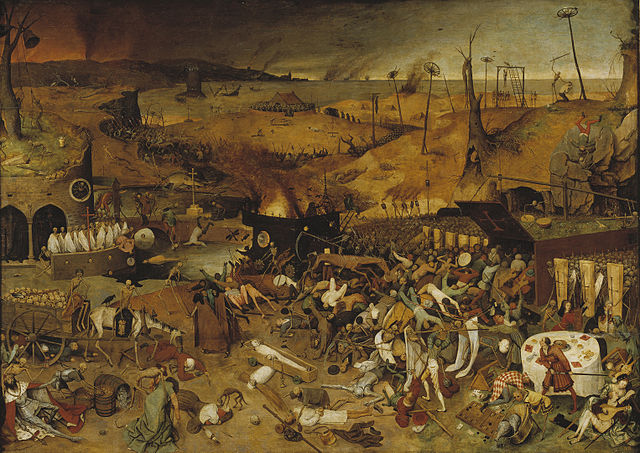 Systems biologist Michael White, writing for Pacific Standard, dismisses the narrative that our genetic material is a “highly sophisticated, finely tuned data storage and processing device.” Instead, he says, it is an apocalyptic wasteland “littered with the rubble of ancient and ongoing battles with hordes of viruses, clone armies of genetic parasites, and zombie genes that should be dead but aren’t.” Arguing towards an ecology of the eukaryote genome, he likens it to an ecosystem full of communities that have grown, preserved, interacted and competed with each other in a complex system of relationships:

The major players in our genomic ecosystem are DNA parasites called transposable elements, named for their ability to move around the genome and make copies of themselves. Transposable elements, which make up at least half our genome, are “selfish” genetic elements that exist because they have a strategy to get passed on to the next generation without necessarily contributing any useful function to the organism. Other denizens of our DNA include Human Endogenous Retroviruses (HERVS, eight percent of our genome), viruses that took up permanent residence in the egg or sperm cell of one of our distant ancestors, and zombie “pseudogenes,” functional genes that were killed by some genetic mishap but still have an influence on their surrounding genes.

According to the PLOS Genetics study White references, about 50% of the human genome sequence is referred to as “dark matter” because of its unknown purpose or origin. The study demonstrates that approximately half of this dark matter is made up of repetitive sequences, “which are most likely dominated by transposable elements.”

Since transposable elements (TEs) are a considerable component of our biology, better understanding them is a fundamental issue in genetics. How do they help and how do they harm? White says TEs have contributed to building new links between genes. But he also states that this genetic innovation results in uncontrolled variability and unwanted mutations, leading to certain human diseases. The exact role TEs play in our genome will take a long time to unravel, but the picture they’re already beginning to paint depicts a less-than-harmonious path to our present selves.

The idea that your genome is an ecosystem populated with species that pursue their own self-interest may make you wonder: Who am I, really? Unlike the parasites that you pick up when you drink the water in a place where you shouldn’t, transposable elements and endogenous viruses aren’t really foreign invaders; they are your DNA, and they have been part of our genetic identity for longer than we have existed as a species.

(The image above was painted by Pieter Bruegel the Elder.)

10,000 pepper genomes tell a story about the history of global trade.

The Long Now Foundation · James Nestor – The Future of Breathing Drawing on thousands of years of medical texts and recent cutting-edge studies in pulmonology, psychology, biochemistry, and human physiology, journalist James Nestor questions the conventional wisdom of what we thought we knew about ...