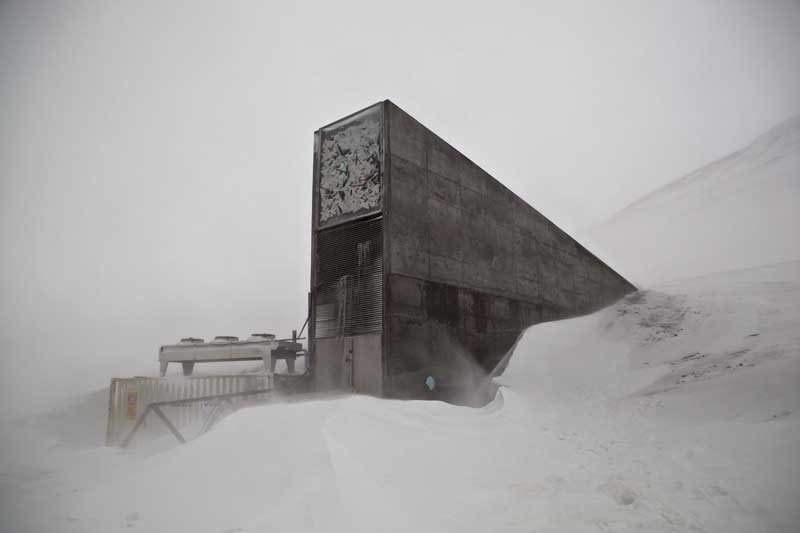 Writing for Aeon Magazine, Colin Dickey, visited the Svalbard Global Seed Vault and discusses the apocalyptic rhetoric often associated with the project. He points out that apocalyptic thinking, while sometimes an effective motivator, can be a barrier to long-term thinking.

This obsession with impending disaster suggests that we see nature on a particularly human, individual scale. When we think of environmental damage and the human impact on the ecosystem, we think almost exclusively in the short term. The millennium, be it religious or environmental, is always coming the day after tomorrow.

Exploring the surrounding environment, he marvels at how little human history has transpired in this remote place and yet how well what has happened there has been preserved. Today’s apocalyptic narratives put nature in the role of a vengeful god, but Dickey finds hints of salvation in Svalbard’s landscape. The seed vault, he points out, isn’t primarily a reaction to imminent disaster, but rather a hedge against slow-moving trends threatening crop-diversity and it utilizes the naturally cryogenic Arctic to its advantage.

Sometimes what seems like a panicked gasp for breath is something else entirely. The lessons of Svalbard are more complex than the simple, immediate apocalypse intimated by the hype surrounding the seed vault…

… A proper relationship to nature must involve a sense of stewardship, to be sure, and a willingness to work for a better tomorrow. But it might also do well to be stripped of a histrionic sense of perpetual catastrophe. Places such as Svalbard can help us to think on a much longer, deeper scale — one in which we are peripheral characters in a drama taking aeons to unfold.