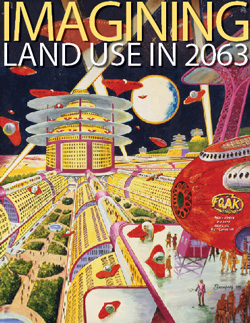 Since the beginnings of civilization, humans have had reason to think carefully about where to grow food, where to sleep, where to put waste. We call it land use planning and for most of history it’s happened pretty haphazardly. Like other activities, though, we’ve gradually systematized the process, especially as we’ve come up against scarcity and competition. Until we can move significant portions of the population to a new planet, land will only get more scarce, of course, and how we make use of it in the future is an important conversation to have.

Patrick J. Kriger, writing for Urban Land, describes two visions for the next 50 years of American land use planning. One scenario extrapolates forward the trend-line of ever-increasing urbanization:

By 2063, the suburban tract house and the shopping mall will have gone the way of the dinosaurs, and a generation of workers in the knowledge-based economy will flock to high-density, walkable urban mixed-use neighborhoods. Some may live in “smart” apartment buildings with motorized walls designed to transform bedrooms and offices into dining rooms and home gyms, depending on the time of day, and travel in miniaturized robotic cars that are controlled by a wireless network to minimize congestion.

Another scenario imagines that innovation will allow certain benefits of city-life to be enjoyed in the countryside and that this compromise will shift the trend towards less concentration:

50 years from now, people increasingly will forsake the cities for the rural countryside. They will live in updated, technologically advanced, and economically self-sufficient versions of the 19th-century village. These lower-density “micro urban” communities will enable their inhabitants to own spacious houses and their own automobiles, but also will allow them to enjoy the same economic opportunities and cultural amenities of urban areas while savoring the pleasures of living close to nature.

He lists the core factors that will influence these trends as population growth and demographic shifts, advances in technology and design, climate change, scarcity and abundance (water in particular), and the decentralization of production. 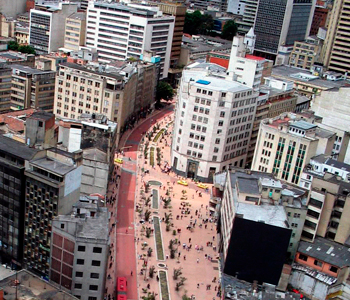 Human population is both growing faster than ever and expected to level off in the next century (though exactly where remains open to debate). Alluding to these facts, Enrique Peñalosa, the former mayor of Bogotá, Colombia, points out in his essay in The Atlantic that,

It is unlikely that city building on the scale to be seen through 2050 will happen ever again.

In other words, the population and urbanization explosion we are currently living through is an event, not a permanent reality.

As Kriger points out, the average lifespan of a residential building is 53 years; for commercial it’s 65. Decisions being made and designs being drafted now will have profound impacts on the quality of life, economic prospects, and environmental impact of the next 2 to 3 billion citizens of Earth. The approaches described in these two essays will determine how well we manage this event and they will establish how we utilize one of our most precious resources – the Earth’s surface – for generations to come.