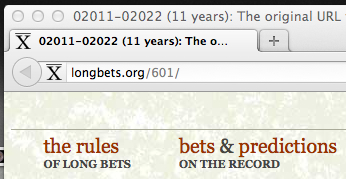 A major concern of the digital dark age is link rot – the eventual failure of URLs to point to the intended files. As website maintenance falters for any number of reasons the pages can cease to be accessible, even though their addresses may be listed on many other sites.

The notion that Long Bets will be around to assess wagers many years (in some cases, over a hundred) into the future struck web developer Jeremy Keith as a bit far-fetched. In the spirit of the site, therefore, he made a Prediction that the URL pointing to the Prediction he was making wouldn’t last 11 years.

He gave a talk at Webstock earlier this year called Of Time and the Network exploring our changing perception of time as a result of our changing level of interconnectedness. At 31:30 he discusses his thoughts on long-term challenges to the accessibility of URLs and dares someone to take him up on the Bet. You can read a transcription of the talk and a blog post he wrote about the Bet itself.

Another presenter at Webstock, Matt Haughey, was game. He gave a talk later in the conference about long-term thinking in the context of the web and, while consistent URLs weren’t the main focus, he touched on the problem and actually officially challenged Keith in his presentation – check it out in the video at 18:50. He was also kind enough to transcribe his talk for those who’d like to read it.

We're very excited to have this Bet on record and it's being closely watched by our systems administrator, designer and web developer Benjamin Keating.

Keith and Haughey have each offered stakes of $500, with the winnings going to either the Bletchly Park Trust or the Internet Archive. You can read and comment on their arguments and the detailed terms we’ll use to adjudicate the Bet at Long Bets.