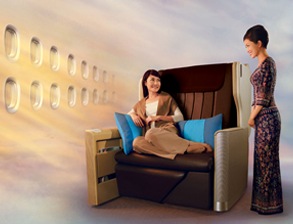 Living in modern civilization, it can be easy to sometimes forget just how much *stuff* we rely on to meet our basic needs and just how much scientific sweat and blood it’s all taken to create. Bruce Mau illustrates this in the beginning of his book Massive Change by using the metaphor of modern air travel:

“Every plane crash is a rupture, a shock to the system, precisely because our experience of flight is so carefully designed away from the reality of the event. As we sip champagne, read the morning paper, and settle in before takeoff, we choose not to experience the torque, the thrust, the speed, the altitude, the temperature, the thousands of pounds of explosive jet fuels cradled beneath us, the infinite complexity of the onboard systems, and the very real risks and dangers of takeoff and landing.”

The technological apparatus that is modern civilization, or The Technium as Kevin Kelly calls it, allows us to fly high in style. But, it’s a complicated and often fragile mess designed to channel very powerful forces – and it can fail catastrophically if we aren’t careful. Additionally, it’s taken many generations of accumulated knowledge and expertise to craft and enable such soaring capability.

Referencing that hard-won store of knowledge, Richard Feynman once asked,

“If, in some cataclysm, all of scientific knowledge were to be destroyed, and only one sentence passed on to the next generations of creatures, what statement would contain the most information in the fewest words?”

“Imagine—much as Feynman asked his audience—that in a mission to change everyone’s thinking about the world, you can take only one lesson from your field as a guide. In a single statement, what would it be?”

Some interesting themes fall out, as well as some contradicting ideas:

It’s an interesting challenge, to distill everything we’ve learned over the last few millennia into a useful sentence. Which theories have been most important? What details would we be most hard-pressed to re-discover? Perhaps the most all-encompassing answer comes from John Wilbanks, vice president of science at Creative Commons:

“Knowledge is a public good and increases in value as the number of people possessing it increases.”

If pondering the essence of modern civilization and technology gets your gears going, don’t miss the Manual for Civilization, a list of projects focused on preserving the technical knowledge it takes to build and maintain the infrastructure on which we depend collected by Long Now’s Alexander Rose or Long Now Board Member Kevin Kelly’s Library of Utility, a proposal to collect such knowledge, and to store it in a place that might have a reasonable chance of surviving the kind of catastrophe that would make its contents necessary. Also: this.