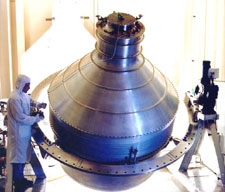 Gravity Probe B is a satellite that, since 02004, has been conducting an experiment first conceived half a century ago with the goal of testing a theory developed another half-century before that.

Indeed, some of the predictions to come out of Albert Einstein’s Theory of Relativity have taken until now – a century later – to test. Nonetheless, frame dragging has been observed and confirmed.

Wondering what took so long? The New York Times explains that the theory had largely been supported by observations of the planets, the Moon and other satellites, but that direct observation of such a subtle effect required some of the most sensitive instruments and precisely machines objects in history.

To measure these minuscule warps in the very fabric of spacetime, Gravity Probe B used the world’s most perfect gyroscopes, monitored by the most precise gyro-monitors, kept directly oriented to a ‘guide-star’ using a telescope and an Attitude and Translation Control system, all maintained at exactly -455.5 degrees F for 16 months while it orbited the earth in a 400-mile high polar orbit.

More on the gyroscopes: 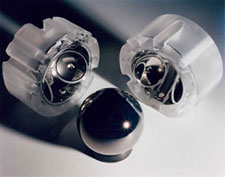 To measure the minuscule angles predicted by Einstein’s theory, the GP-B team needed to build a near-perfect gyroscope—one whose spin axis would not drift away from its starting point by more than one hundred-billionth of a degree each hour that it was spinning. By comparison, the spin-axis drift in the most sophisticated Earth-based gyroscopes, found in high-tech aircraft and nuclear submarines, is seven orders of magnitude (more than ten million times) greater than GP-B could allow.

The rest of the satellite and it’s mission are documented in luxurious detail on the project’s website.