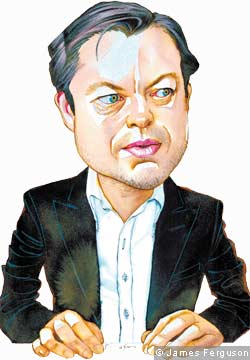 Nicolas Berggruen is known as a bit of an eccentric and often referred to as “the homeless billionare” because of his unique lifestyle – he travels the world in a private jet and lives out of hotels. Financial Times recently interviewed him at one of those hotels and discussed his interest in reshaping the politics and governance of California:

And, having conjured a fortune, he has now a second more ambitious goal: a bold initiative to change the way that western politics and government is conducted. A few years ago, he started attending university courses and became fascinated with the flaws in western government systems. “I have always been very interested in history, so I sat down with a group of intellectuals and wrote a utopian constitution.”

He also used $100m of his money to create a think-tank, the Berggruen Institute, which promotes fresh debate about politics and constitutional reform. Then, four months ago, he used $25m to launch a more specific campaign to “save” California, a place where he spends several months each year, usually living at the Peninsula Hotel in Beverly Hills.

The institute is now promoting radical fiscal measures to tackle the state’s ballooning debt burden and to implement longer-term structural reforms, under the rubric of the “Think Long Committee for California.”

The Think Long Committee for California will consist of 10 or 15 “eminent Californians” who will make recommendations to the governor and the legislature and may potentially propose public ballot initiatives to enact its vision:

From the NBI perspective, good governance involves the responsive, efficient delivery of services to the public by a fiscally responsible government. Above all, it means politics conducted in a spirit of pragmatism that does not sacrifice the long term to short-term special interests.