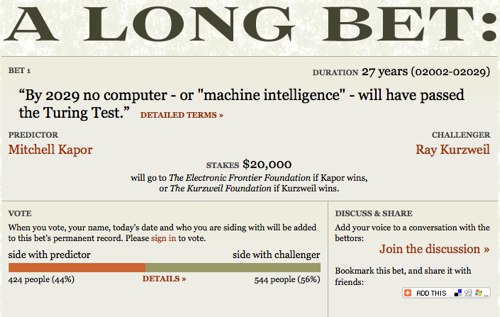 John Rennie over at IEEE Spectrum has an excellent article on Ray Kurzweil’s 108 predictions for 02009 from his book Age of Spiritual Machines.  Ray Kurzweil is an avid and fearless predictor who also logged the first of our Long Bets with Mitch Kapor.  I think it is great that people are taking the time to do an analysis of the predictions, and finding out how sticky it can sometimes be to adjudicate such things.

Kurzweil also stands by his claim that computer displays built into eyeglasses would project images into users’ eyes because some such systems do exist, and says, “The prediction did not say that all displays would be this way or that it would be the majority, or even common.” Similarly, he defends his claim that translation software would be “commonly used” to allow people speaking different languages to communicate by phone by pointing to smartphone apps that emerged at the end of 2009. He allows that one could quibble about how “common” their use is. [read the complete article]

Wherever you fall on these issues, I think Kurzweil deserves praise for making public predictions, along with those like Rennie and Annisimov who take any predictor to task.