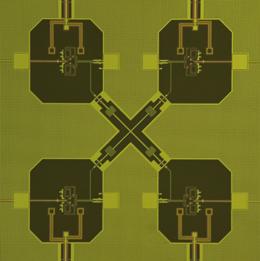 “The entanglement of two or more qubits sets up a ‘superposition’ of states in which calculations can run in parallel — in principle allowing a quantum computer to race through problems that it would take a classical computer eons to solve. Such a quantum machine would require hundreds or even thousands of entangled qubits. The maximum reached so far is 12, but some of the systems that researchers are working with, including those depending on the spins of ions, may be hard to scale up.” [read the story]

While this is progress it does not look like we are on the road to having a commercially available 100 qubit machine by the end of 02010 as predicted on Long Bets:

“There will be a quantum computer with over 100 qubits of processing capability sold either as a hardware system or whose use is made available as a commercial service by Dec 31, 2010”

Looks like this is a good prediction, but just a few years off.