Atlas Obscura, “a compendium of the world’s wonders, curiosities and esoterica” in collaboration with Long Now has created a new category just for us called Long Now Locations.

Ranging from items that were created with a long-term mindset and intention, as were the Oak Beams at New College Oxford, to items that accidentally survived and now serve as long-term examples, telling a story and giving important information regarding past civilizations and their knowledge and capabilities, like the Antikythera Mechanism.

We encourage Long Now supporters to explore the Long Now Locations collection and add your own experiences with places and items of long-term nature, and maybe even some examples of poor long-term thought or planning. Sign up with an Atlas Obscura to start contributing your stories.

In addition to Long Now Locations, on Saturday March 20 02010, Long Now collaborated with Atlas Obscura on the first, of what we hope will be many an Obscura Day. Taking part in a day of 80 events, expeditions, back-room tours and hidden treasures in 20 countries worldwide, Long Now’s Museum & Store opened our doors to over 80 Obscura Day explorers for an evening of merry-making and conversation around the Long Now and the 10,000 Year Clock.

After exploring the Musee Mechanique alongside owner Dan Zelinsky, the San Francisco Obscura Day party roved down along the historic Aquatic Park and over into Fort Mason where an after-party was held at the Long Now Museum & Store to close Obscura Day’s world-wide events and festivities. 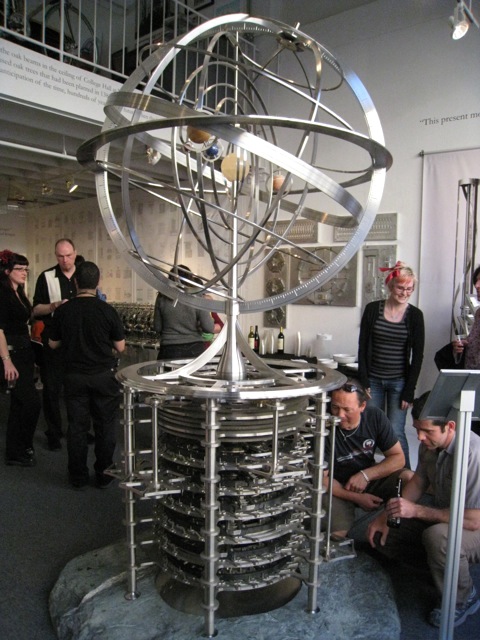 Long Now and Atlas Obscura staff and guests gathered to mingle around prototypes of the 10,000 Year Clock of the Long Now. Amongst the Orrery, Chime Generator, and Tungsten Bobs. Alexander Rose, Executive Director of Long Now and Project Manager/Designer of the 10,000 Year Clock, gave an introduction to the clocks various prototypes. Clock engineers, Greg Staples and Paolo Salvagione were also in attendance to answer questions and give demonstrations of the various prototypes.

Here is a wonderful video and summary on the day from Atlas Obscura:

The day started with folks hiking out to an abandoned railroad tunnel Australia to see bioluminescent glow worms, and ended some 30 hours later with San Francisco obscuraphiles watching an amazing demonstration of parts of the 10,000-Year Clock at the Long Now Foundation. In between, we walked the lost River Fleet in London, visited amazing anatomical museums in Paris, Washington, Boston, and Philadelphia, toured the world’s largest treehouse in Tennessee, circumnavigated one of the largest holes in the world in Butte, made shiny mud balls in Albuquerque, and photographed an unbuilt suburb in the Mojave desert.

Want to be updated on future Atlas Obscura events and tours? Sign up here.