After its initial public appearance at this year’s Maker Faire followed by an evening at the Exploratorium, the escapement, circular pendulum and Clock face were installed at our Long Now Museum and Store at Fort Mason Center and can be viewed seven days a week – just check our website first for our hours.

About the escapement, circular pendulum and Clock face: 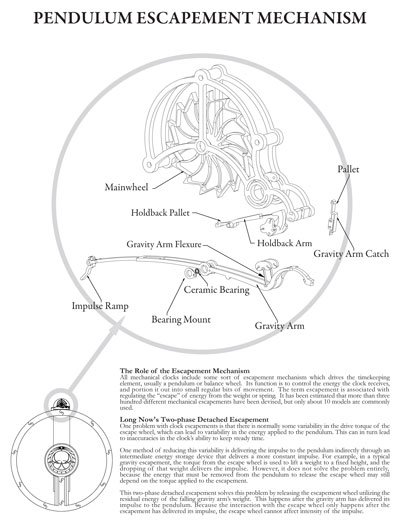 This pendulum and escapement represent a snapshot of our development process in timekeeping for the monument size clock. The dials in the center are non-functioning in this model and were used as a visual mock-up for a scaled up version. The function of the escapement is to both drive the pendulum and transfer the regular beat of the pendulum to the timekeeping elements of the Clock. This allows the Clock’s stored energy to ‘escape’ at a regular rate, thus advancing the drivetrain and displays in a manner that allows them to keep time.

This particular pendulum and escapement system is unique in several ways, one of which is likely obvious at a glance. The large ring around the face is actually a pendulum suspended on a specially designed flexure. With most pendulums, the weight is completely below the point of rotation and the distance between the two is what determines the period (the time between ticks). The ring configuration in this pendulum adds weight above the point of rotation, which causes it to swing more slowly than it would otherwise; the period is 10 seconds. By reducing the number of ticks the Clock will go through, the rate of wear can also be reduced.

The second unique element of this mechanism is in the small gear system above the pendulum; the escapement itself. Danny Hillis explains:

One problem with clock escapements is that there is normally some variability in the drive torque of the escape wheel, which can lead to variability in the energy applied to the pendulum. This can in turn lead to inaccuracies in the clock’s ability to keep steady time. One method of reducing this variability is delivering the impulse to the pendulum indirectly through an intermediate energy storage device that delivers a more constant impulse. For example, in a typical gravity escapement, the torque from the escape wheel is used to lift a weight to a fixed height, and the dropping of that weight delivers the impulse. This isolates the strength of the impulse from the torque applied to the escapement, but it does not solve the problem entirely, because the energy that must be removed from the pendulum to release the escape wheel may still depend on the torque applied to the escapement. 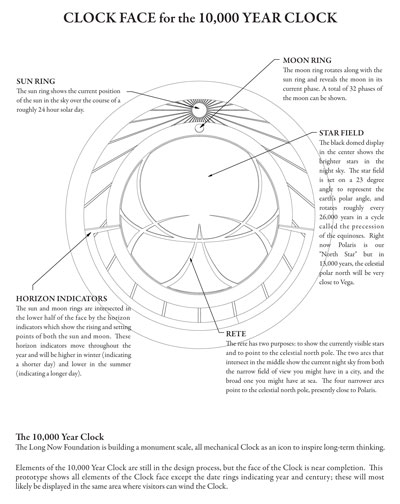 At the center of the pendulum is a prototype for the Clock’s face. Rather than hours and minutes, the face displays information about the movement of the sun, stars and moon. The outer ring is shows the movement of the sun; it rotates once per day, passing horizon indicators that show sunset and sunrise. Those horizon indicators change along with the seasons to show the progressive lengthening and shortening of days. The next ring into the center reveals the current phase of the moon and it will rotate along with the lunar cycle; all 32 phases of the moon are shown by this ring.

The center of the face shows the stars of the night sky. The face is intersected by six arcs collectively known as the rete. The wide arcs represent the horizon, so that above them the stars that can be seen at a given time are visible. Stars below those arcs will not be currently visible as they’re blocked by the planet you’re standing on. The four arcs that terminate near the center point towards the celestial north pole, the point around which we observe the stars rotating. Polaris is currently the closest star to that point, which is why we call it the North Star, but as the earth’s axis precesses, Vega will move closer to that position and become our “North Star” in about 13,000 years. On the Clock’s face, the rete rotates along with the earth to show the daily movement of the stars. To account for the axial precession, the black surface with the stars on it will turn around in a 26,000 year-long rotation.