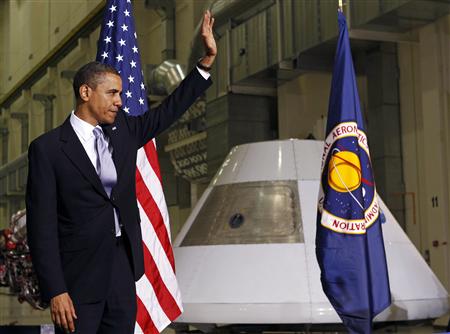 This week President Obama laid out his plan for the future of NASA.  It includes a large budget increase, a push to hand off orbital space flight to private companies, the design of new propulsion systems, and included the long-term goals of landing on an asteroid, going to Mars, and even pushing beyond that.  The national press and political reaction has been interesting to watch from a perspective of long-term thinking.  While there has always been a general agreement that we want to achieve these goals, the administration is taking heat from the press and both sides of the isle for looking “too far out.”

Reaction to President Obama’s plan to kill the space shuttle, scrap moon missions in favor of deep-space travel, and outsource launches to private contractors is falling mostly along partisan lines—but even some Democrats said the proposals could hurt U.S. space interests in the short term. (information week)

It was predictable that representatives of all the “space states” like Florida and Texas might get upset. It was a little less predictable to see the right opposing privatization of orbital flight however. But even beyond that, I think this is one of the first cases I have seen a political figure chastised explicitly for thinking too long-term.

The best bit of long-term thinking was actually glossed over in the announcement of an asteroid mission.  An asteroid or comet impact on earth is the only serious threat to human (and nearly all lifes) existence, yet we spend basically no part of NASA’s budget trying figure out how we might avert such a disaster (the little bit of funding for Rusty Schweickart’s program is an exception, but a small one).

Aside from the very important asteroid mission, is the audacious goal of not only going to Mars, but landing humans on it.  This has been talked about for years, and I think that the average person thinks of this as a simple step forward from landing on the moon.  I used to think that.  But in the last year I have had dinner with the director at NASA Ames, given a talk at the Jet Propulsion Laboratory, and watched a shuttle launch from about as close as humans are allowed to get.  I have learned that going to space is dangerous and difficult.  It also requires a fantastic amount of infrastructure.  Look at the picture below of Kennedy Space Center: 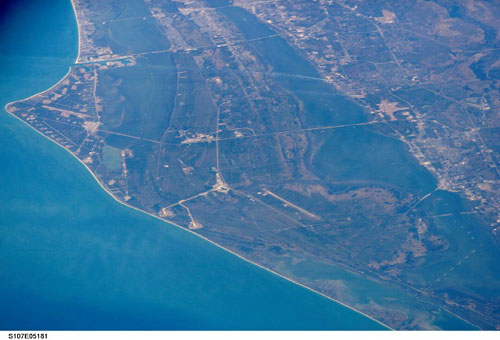 It goes on for miles and miles of some of the largest and most specialized buildings and facilities in the world.  And Kennedy is just the prep and launch facility, the spacecraft and payloads are almost all built with private contractors or at the other 13 huge NASA facilities around the country.  When I had dinner with several NASA scientists at JPL I remember them telling me that with existing technology we might be able to get humans to Mars… and keep them alive for about 45 minutes. Getting Home? forget about getting home…

In order to get to and come back from another planet with gravity like Mars, (unlike the moon and asteroids with little gravity) we will have to package up at least the minimal functionality of Kennedy Space Center, and all the fuel needed for all legs of the trip.  We will have to take that package, launch it into space (now is a good time to remember that for every pound of payload we launch, we use about 95 pounds of fuel), then fly it 300 million miles, land it with little or no recovery infrastructure, unpack it all, re-assemble it, refuel and launch.  Even if some of the plans for making our own fuel, water and oxygen play out, the bare bones infrastructure and ability to prep a spacecraft for flight on another planet is astoundingly difficult.  This is, by definition a long-term plan, and continuing to spend money on the same technology that barely gets us to orbit will not get us there.  If we truly want to send humans beyond the moon, we are going to have to invent a lot of new technology, and invest heavily in education.  Now seems like as good a time as any to get started…