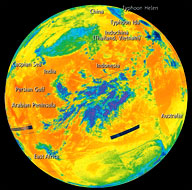 Researchers at NASA’s Ames Research Center recently were able to recover some very old and useful data.  The Nimbus II satellite created a detailed mosaic of the earth’s cloud cover and heat radiation in 1966.  Such old and detailed climate data is a boon to today’s researchers, but it wasn’t easy to come by.  Indeed, the data was lost for quite some time due to the tapes on which it was recorded – the secret to their longevity was whale-oil, but it became unattainable in the 1980’s due to the cessation of commercial whaling.  Since they couldn’t get more long-lasting tapes, NASA chose not to keep the old data, but rather to rewrite the tapes with newer data that they decided needed to be preserved for the long-term more than the old data that, when it was new, needed to be preserved for the long-term but, once it was old, did not.  Some 200,000 tapes endured this fate.

What about the machines used to read the tapes?  Perhaps it was a form of penance: many of them ended up being dumped into the ocean to create coral reefs. Fortunately, a team of techno-archaeologists working as the Lunar Orbiter Image Recovery Project have been working to track down old and lost copies of tapes like these, as well as restore the machines required to read them.  Luckily, some of the Ampex tape drives made their way into the garage of a woman named Nancy Evans, an engineer from Jet Propulsion Laboratory.

The LOIRP team obtained $750,000 from NASA and private enterprise and enlisted the assistance of a retired Ampex engineer. They cleaned, rebuilt, and reassembled one drive, then designed and built equipment to convert the analog signals into an exact 16-bit digital copy. “It was like dumpster diving for science,” says Cowing, co-team leader at LOIRP.