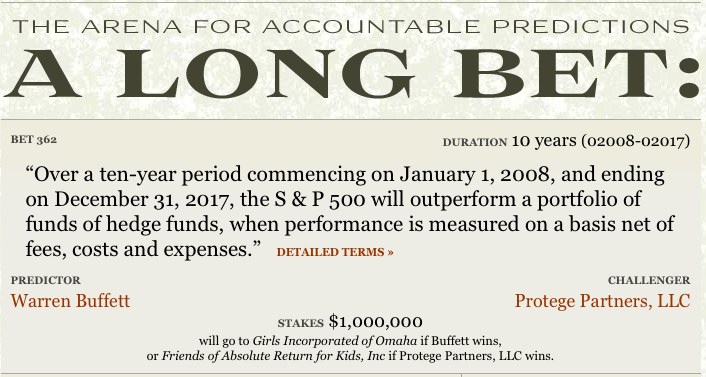 It took a while to get all the numbers crunched, but the first year’s results from the Long Bet with the highest prize are in.  Over a year ago Warren Buffet challenged the managers of several funds-of-funds to outperform the S&P 500 over a 10 year period.  A one million dollar charitable donation is on the line and so far Buffet’s opponents, Protege Partners, are doing less bad.  Carol Loomis, author of the original story on the contest, gives us the details:

Remember “Buffett’s Big Bet” (see fortune.com), in which the noted
investor and Ceo of Berkshire Hathaway maintained that an S&P 500 index
fund would outperform five funds-of-hedge-funds over 10 years? Well, the
results for the first lap, the ago-nizing year of 2008, are finally in,
and the funds-of-funds soundly whipped the index. Vanguard’s S&P 500
Admiral shares, the index fund “bought” by Buffett, were down 37.02%. on
the average, and net of all fees, costs, and expenses, the five
funds-of-funds backed by Buffett’s opponent, Protégé Partners llC, a new
York money-management firm, delivered –23.9%.

Considering that hedge funds can and do sell short, and that they are
not limited to investing in stocks, Protégé’s victory in a bear market
year like 2008 was not surprising to anyone involved in the bet. Ted
Seides, the Protégé partner who engineered the bet with Buffett, says
that until September of that year the five funds-of-funds were in fact
doing well enough that they still anticipated achieving the up year that
hedge fund seek to deliver, even in difficult markets. “But when markets
failed in the aftermath of the Lehman bankruptcy,” says Seides, “the
funds couldn’t avoid the storm.”

Which funds are these, you ask? The bet stipulates that their identities
would not be disclosed. Buffett, however, knows their names and has seen
their audited results. About his trailing position, he says, “I just
hope that Aesop was right when he envisioned the tortoise overtaking the
hare.”

The reader will note that we said the results of the bet are “finally”
in, and therein lies a little story. originally, the thought was that an
update on the bet would be announced each year at Berkshire’s annual
meeting, held in late spring. But the five funds-of-funds did not have
audited financial statements at that time, which made Buffett unwilling
to announce results. only in late october, when the last of the five
funds finally delivered its audited figures to Protégé, were complete
results known. They were very close to what Protégé had earlier
estimated they would be, so it is likely that next year Buffett will
indeed announce 2009 “approximate” results at Berkshire’s meeting in the
spring.

The author of this article is both a friend of Buffett’s and the editor
of his chairman’s letter in the Berkshire Hathaway annual report.