UPDATE:
• Bruce Sterling’s eulog video is now live (above).
• Four Bay Area TV stations will be going off the air tonight: KOFY (Channel 20), KCNS (Channel 38), KICU (Channel 36) and KFTY (Channel 50).
• Paul Saffo did an interview for the BBC on the Funeral for Analog TV.

Author Bruce Sterling, technology pundit Paul Saffo, and other special guests on the UC Berkeley campus mourned the loss of our long time acquaintance, the Analog Television Signal. Born in the 1920’s in San Francisco, the signal has been an integral part of all our lives, bringing us news of the rich, the famous, the politicians, the wars, the Apollo landings, the thrills of victory, and the agonies of defeat. While Analog Television has not been a good friend to us all, it has been important to each and every one of us. Analog Television is survived by its wife Digital Television, and its second cousin Internet Television. In a soap-operatic melodrama fit for TV itself, Congress has debated changing the official date for the switch to digital television; however this event went on as planned on Feb. 17 because we prefer to bury a fresh corpse rather than wait for the walking dead to fall over.

Many participants brought their Analog TV for display and recycling in memoriam to our life long friend. At the ceremony Paul Saffo spelled out the sordid history of the Analog TV Signal’s life, the group Author and Punisher performed the funeral dirge, and author Bruce Sterling delivered the eulogy just before the analog signal winked out for the last time and the frequency wasteland was invaded by pirate TV artists. It’s rare that the entire nation gets a specific date on which one major medium dies and is replaced by another.

Special thanks to the Long Now membership, the William and Flora Hewlett Foundation, the Rock Star bartenders, ACCRC, Bruce Sterling, Paul Saffo, and all the staff, partners and volunteers that helped make this happen. 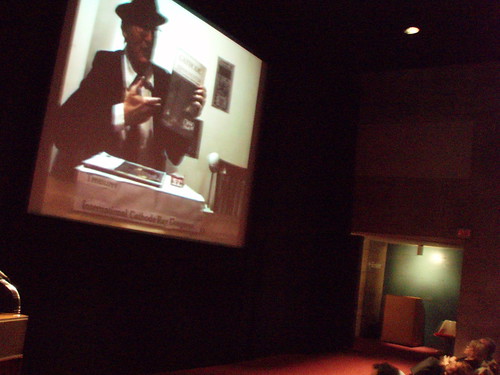