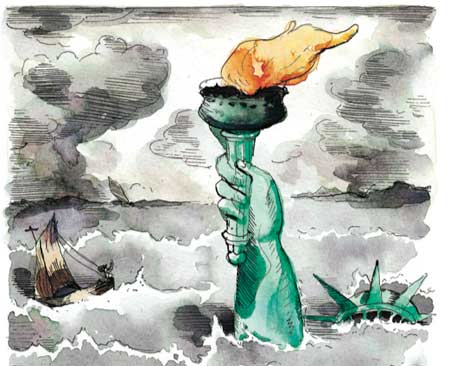 There is a good article by Ben McGrath in the January 26th, 02009 New Yorker (reg. required) on the economic collapse that features our upcoming speaker Dmitry Orlov, past speaker Nassim Taleb and even a mention of Kevin Kelly.  Unfortunately, the article spends a bit too much time with the likes of Howard Kunstler, who I would consider way over the edge on how far this collapse will go.  Nevertheless it’s worth a read.   Some excerpts:

A year and a half ago, with real-estate prices falling, Dmitry Orlov, a forty-six-year-old software engineer from Leningrad, sold his apartment in the Brighton section of Boston, along with most of its contents, and bought a sailboat—an old sharpie made from Douglas-fir marine plywood, on which he and his wife, Natasha, a literary translator, now live, debt-free.

Orlov moved to the United States when he was twelve, and returned to the Soviet Union for the first time in 1989, shortly after his uncle, a political prisoner under the Andropov regime, was released. During his second trip back, in 1990, the country was suffering from a fuel shortage, and he financed a road trip to the medieval towns of Pskov and Novgorod with a trunk full of vodka, trading half-litre bottles for ten litres of gasoline from black-marketeers along the way. (This was just after Gorbachev’s anti-alcoholism campaign, and Orlov capitalized on a death in the family by redeeming a funeral’s worth of vodka coupons.) The only comparable resource seemed to be bluejeans, of which he’d brought only one pair. No one wanted rubles. He internalized the lesson for future reference: “When faced with a collapsing economy, one should stop thinking of wealth in terms of money.”

Whereas Kunstler worries about being marginalized because of an association with “whack jobs” and their fringe ideas (he complains of being “pestered incessantly with conspiracy nutcases”), Taleb wonders how serious people can fail to understand how crazy the world really is. “I got two million  e-mails from people saying, ‘You’re right,’ ” Taleb said. “About a million people read my book before the crisis, but nobody got protection!”

Taleb’s perspective is not for the anxious or weak-willed. In an effort to protect yourself from too much dependence, you begin with the certainty that a side effect of globalization is “fragility”: a problem in Icelandic banks depresses Maine.

Capitalism itself, through the relentless pressure of quarterly reports, introduces too much efficiency and socially destabilizing leverage, so you recommend a reversion to something like an Islamic banking system, in which debt-based lending is forbidden, or at least heavily discouraged. (Taleb grew up in Lebanon, where an ongoing civil war had the beneficial effect of dissing people from trusting banks.)