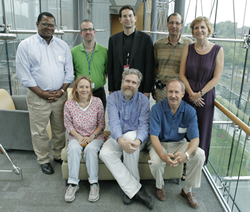 If you’ve ever wanted to know more about Long Now Foundation board member Esther Dyson, now is your chance to get up close and personal.  As part of the Personal Genome Project, Dyson has joined 10 volunteers, including the head of the program, geneticist George Church, and psychologist Steven Pinker, in making public their personal genetic codes.  Dyson will be speaking about the group’s goals this weekend at the Singularity Summit, but if you can’t make it to San Jose, the Personal Genome Project’s website has the scoop:

We believe individuals from the general public have a vital role to play in making personal genomes useful. We are recruiting volunteers who are willing to share their genome sequence and many types of personal information with the research community and the general public, so that together we will be better able to advance our understanding of genetic and environmental contributions to human traits and to improve our ability to diagnose, treat, and prevent illness.

In order to achieve these goals, the Personal Genome Project wants to make the genetic and medical records of volunteers accessible to the public.  The PGP hopes to make it much easier to conduct genetic research by building a publicly accessible treasure trove of genetic data.  After the initial 10 volunteers, the PGP is hoping to enroll another 100,000 people to contribute to the database.  Sign-ups begin soon.

Open-sourced genetics research is an exciting, new and somewhat controversial field.  One of Long Now’s upcoming Seminar speakers, Drew Endy, takes the open approach to his work on synthetic biology, the engineering of life at a molecular level.  Whether that excites you or gives you the willies, you should probably come to the debate he’ll be having on November 17th with Jim Thomas, a member of the ETC Group.

PS: Don’t forget to brush up on your synthetic biology by checking out Craig Venter’s Seminar from February.  You can also familiarize yourself with the Long Now debate format by revisiting out last debate, which focused on the potential for human progress and featured historian Niall Ferguson and futurist Peter Schwartz.