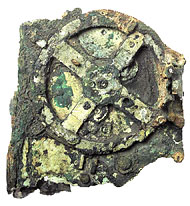 At Long Now we have been paying attention to the Antikythera Mechanism happennings for many years, as we love to see two millennia old clocks get dug out of the deep and understood by modern technology.

The Antikythera Mechanism, sometimes called the first analog computer, was recovered more than a century ago in the wreckage of a ship that sank off the tiny island of Antikythera, north of Crete. Earlier research showed that the device was probably built between 140 and 100 B.C.

In November of 02006 Nature (via BBC) published some of their discoveries in the mechanism using modern scanning techniques, and now there is even more cool findings (also from Nature via NYT sent in by Jim Mason)…

After a closer examination of the Antikythera Mechanism, a surviving marvel of ancient Greek technology, scientists have found that the device not only predicted solar eclipses but also organized the calendar in the four-year cycles of the Olympiad, forerunner of the modern Olympic Games.

The new findings, reported Wednesday in the journal Nature, also suggested that the mechanism’s concept originated in the colonies of Corinth, possibly Syracuse, in Sicily. The scientists said this implied a likely connection with the great Archimedes.

ComputingHistoryTechnologyThe Clock of the Long Now