Neal Stephenson’s new novel, ANATHEM, germinated in 01999 when Danny Hillis asked him and several other contributors to sketch out their ideas of what the Millennium Clock might look like. Stephenson tossed off a quick sketch and promptly forgot about it. Five years later however, when he was between projects, the idea came back to him, and he began to explore the possibility of building a novel around it.  ANATHEM is the result, and will be released on September 9th, 02008.

I recently finished reading the review copy that Neal sent.  The book pulled me in immediately, and I ended up reading the nearly 1000-page tome in just a few days. Set in a genre bending alt-future-retro world where mechani-punk technology meets space opera in a blend of the best of Snow Crash and the Baroque Cycle.  Here is what Stewart, Danny and Kevin from the Long Now board had to say… 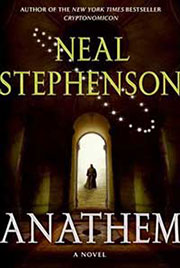 “‘I suffer from attention surplus disorder,’ jokes a character in Anathem.  Attention surplus is exactly what Stephenson teaches his readers, in a book so tightly crafted it rewards instant rereading.” – Stewart Brand

“It is a great story, set in an alternative reality where people take long-term thinking seriously.”    – Danny Hillis

“Long Now’s 10,000-year clock inspired Neal Stephenson’s new story, Anathem, and now Anathem is inspiring the Long Now.  In ten centuries, no one will be sure which came first.”    – Kevin Kelly

The Long Now Foundation will be hosting the book launch event in San Francisco on the evening of September 9th.  The evening will include a reading by Stephenson, Q&A with Danny Hillis, and a small concert of the original music inspired by the book.  Signed copies of the book will also be available.

Members of The Long Now Foundation will get complimentary priority invitations, and if you want to sign up for updates on this event please do so here.

Still wondering what The Long Now Foundation is?  You can find out more here.