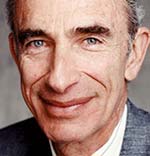 To track how humans became Earth’s dominant animal, Ehrlich began with a photo of a tarsier in a tree. The little primate had a predator’s binocular vision and an insect-grabber’s fingers. When (possibly) climate change drove some primates out of the trees, they developed a two-legged stance to get around on the savanna. Then the brain swoll up, and the first major dominance tool emerged—language with syntax.

About 2.5 million years ago, the beginnings of human culture became evident with stone tools. “We don’t have a Darwin of cultural evolution yet,” said Ehrlich…