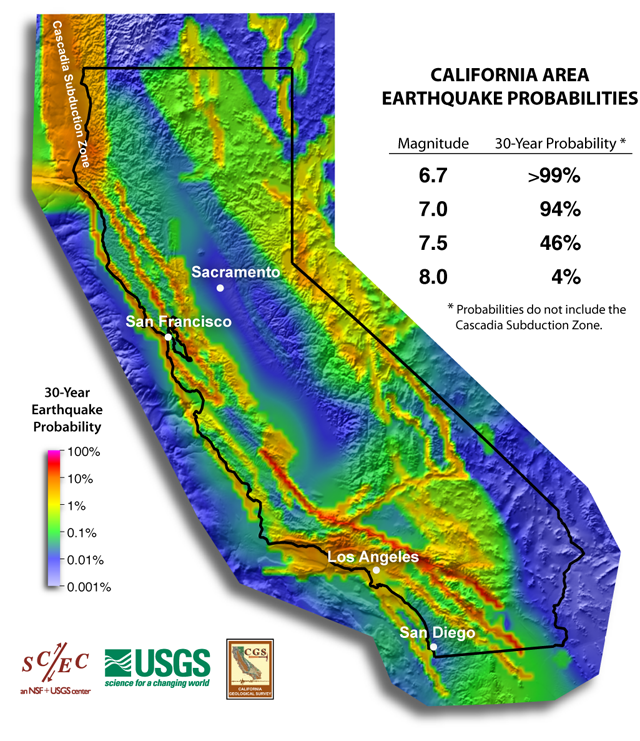 California is more than 99% likely to face an earthquake of magnitude 6.7 or greater over the next thirty years, according to a new model which this week produced the first ever statewide forecast.

New calculations reveal there is a 99.7 percent chance a magnitude 6.7 quake or larger will strike in the next 30 years. The odds of such an event are higher in Southern California than Northern California, 97 percent versus 93 percent.

The last time a jolt this size rattled California was the 1994 Northridge disaster, which killed 72 people, injured more than 9,000 and caused $25 billion in damage.
[…]
The analysis is the first comprehensive effort by the USGS [United States Geological Survey], Southern California Earthquake Center and California Geological Survey to calculate earthquake probabilities for the entire state using newly available data. Previous quake probabilities focused on specific regions and used various methodologies that made it difficult to compare.

The official earthquake forecasts, known as the “Uniform California Earthquake Rupture Forecast (UCERF),” were developed by a multidisciplinary group of scientists and engineers, known as the Working Group on California Earthquake Probabilities. Building on previous studies, the Working Group updated and developed the first-ever statewide, comprehensive model of California.
[…]
The probability of a magnitude 6.7 or larger earthquake over the next 30 years striking the greater Los Angeles area is 67%, and in the San Francisco Bay Area it is 63%, similar to previous Bay Area estimates. For the entire California region, the fault with the highest probability of generating at least one magnitude 6.7 quake or larger is the southern San Andreas (59% in the next 30 years).
[…]
The new model does not estimate the likelihood of shaking (seismic hazard) that would be caused by quakes. Even areas in the state with a low probability of fault rupture could experience shaking and damage from distant, powerful quakes. The U.S. Geological Survey (USGS) is incorporating the UCERF into its official estimate of California’s seismic hazard, which in turn will be used to update building codes. Other subsequent studies will add information on the vulnerability of manmade structures to estimate expected losses, which is called “seismic risk.” In these ways, the UCERF will help to increase public safety and community resilience to earthquake hazards.

An important challenge lies in figuring out what individuals can or should do, if anything, with this kind of probabilistic overview. Connecting the insights of a long view to the decisions of everyday life is really quite difficult (compared to many things that government agencies do, thirty years is decidedly long-term).

We were impressed by last year’s Bay Area Red Cross campaign for earthquake preparedness, which included the temporary installation of a stunning billboard showing San Francisco’s Market Street in ruins. This is one way of mediating risk in an accessible, experiential form, that may have a real impact on what people think about.

However, this new report suggests how a long-term orientation entails taking account of risks that may or may not be germane, or helpful, on a day-to-day basis. (Should the near certainty of a 6.7 California quake by 02037 be taken as an urgent cue to skedaddle? Perhaps not.) Whereas for institutions with systematic responsibilities, and leverage, such as those that respond to emergencies, or those that set and enforce building codes, this may be news they can use. The fostering of long-term responsibility implies different types of engagement for different audiences.