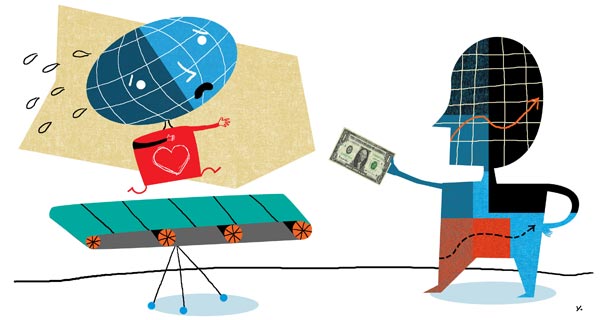 Denise Caruso wrote a nice article on a possible trend in longer term giving in last week New York Times. It dove tails well into the Katherine Fulton’s seminar on the “New Philanthropy” (with Larry Brilliant and Richard Rockefeller). It seems to be part of a multi-decade pendulum of sorts in the trends of non-profit giving. Long-term vs project based support goes in and out of fashion. I suspect it has to do with how well the government is funding issues people care about, and what scandals have occurred in recent public memory around non-profits mis-managing funds.

“The reason the nonprofit sector exists at all is because it can fund and invest in social issues that the for-profit market can’t touch because they can’t be measured,”… said Paul Shoemaker. “The nonprofit ‘market’ is not designed to be efficient in that way. Yet we’re applying the same efficiency metrics to both sectors.”

As a consequence, when foundations switched to project-based accounting, they forced grantees to sacrifice long-term effectiveness for short-term efficiency, Ms. Enright said. Nonprofits could no longer afford to focus on important strategic activities like advocacy or working for social change, which require “deep resources and the ability to change tactics overnight if the situation demands it,” she said.

Based on its data, the Center for Effective Philanthropy concluded that the present situation was limiting the effectiveness of those charitable dollars. After surveying nearly 20,000 grantees of 163 foundations and interviewing 79 foundation chief executives and 26 leaders of nonprofits, it recommended that to maximize the impact on grant recipients, foundations “should make larger, longer-term operating grants” of unrestricted funds that can be used to support the organization and its overall mission, not just specific projects or programs.

Their findings echo the experiences of a handful of foundations at the vanguard of the movement to provide more operating support to charities over the last 10 years. They include the William and Flora Hewlett Foundation, the Edna McConnell Clark Foundation, the Philadelphia Foundation, the Whitman Institute and organizations like Social Venture Partners.