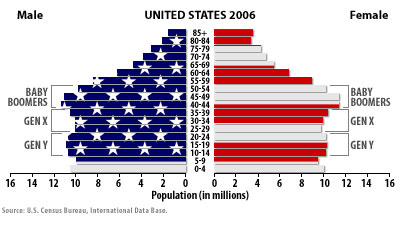 As the largest generation ever in the United States, the Baby Boomers (those born in the post-World War Two period from 01946 to 01964 — demographers differ as to where precisely to draw the lines) are set to exert enormous financial pressure on American retirement funds. Eighty million Americans are expected to apply for retirement benefits over the next two decades, and a recent report by Social Security’s trustees which forecasts more being paid out than taxes received in 02017; and exhaustion of the trust fund by 02041.

Meanwhile, however, other important variables in the mix are changing. Terry Grossman, a collaborator of Singularitian and transhumanist Ray Kurzweil, writes in his book The Baby Boomers’ Guide to Living Forever (Hubristic Press, 02000, p. 3):

As an official member of the Baby Boomer Generation, I really and truly do not believe that it was intended for us to die. Death, if and when it occurs, clearly will represent a mistake of some kind. While I am no official spokesperson for the Boomers, I feel I do accurately express the hubris of my generation. According to my interpretation of the master plan, the Baby Boomers will be the first generation ever to have the option of immortality.”

Hubris is a good word for it. But however seriously one takes the prospect of human immortality, trends in health and medicine over the past several generations are sufficient to raise concern, as expressed for instance in this 02004 New York Times article, that the disbursal of social security funds could become even more problematic.

That which has just begun as a trickle will soon enough become the “silver tsunami” referred to in the press. In the understated words of the Trustees’ Annual Report summary: “Prudence dictates action sooner rather than later to address these fiscal challenges.” It is bound to be a difficult test of foresight in political debate — as well as a potential catalyst for enormous social change, depending on how the health of the Boomers, financial as well as physical, plays out.