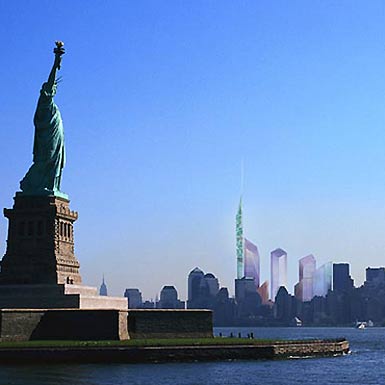 Here at The Long Now we’re always interested in large-scale, ambitious architecture projects, partly because, of course, designing and building the 10,000-year Clock of the Long Now offers a few large-scale challenges of its own.

An article in the London Times this week offers a profile of some of the grandest, most iconic buildings currently on drawing boards, in pipelines, and increasingly, on skylines, around the world:

The planet has become a building site.
…
This is a boom time for architecture. Dubai, Beijing, Shanghai and Moscow are staking their claim to a place on the architectural stage, with no absurdity too extreme. Revolving, iPod-shaped and half-mile high buildings are going up everywhere.

To mark the boom, The Times has picked the ten biggest, most significant building projects now under way.

The intersection of architectural ambition and long-term thinking is an interesting place we find ourselves visiting time and again. One of the founding stories of the Long Now comes from architecture. Writes Danny Hillis, who conceived the (architectural-scale) clock:

I think of the oak beams in the ceiling of College Hall at New College, Oxford. Last century, when the beams needed replacing, carpenters used oak trees that had been planted in 1386 when the dining hall was first built. The 14th-century builder had planted the trees in anticipation of the time, hundreds of years in the future, when the beams would need replacing.

One of the ten projects named in the Times article is the memorial at Ground Zero, New York City, an interesting selection from the perspective of the long-term trendwatcher. At the end of 02001, when the 9/11 memorial project was first envisioned, Mayor Giuliani delivered a farewell speech saying that the World Trade Center site would be remembered 1,000 years hence, a sentiment echoed by others in the wake of the tragedy. And it seems the World Trade Center was thought of in grand, millennial terms long before it became for many, in 02001, a 21st-century sacred site. In Paul Auster’s Sonic Memorial, a man recalls watching the towers being built in his childhood, and his father saying: “These buildings will last for 1,000 years. They’ll be here forever.”

Architecture is one of the ways we engage the long term, because there we confront the simple fact that most buildings outlast their designers, in some cases — and the ambitious ideal seems to be — by many lifetimes. But there’s an interesting tension between the resource-intensiveness of large scale architecture and the kind of long view that comes into consideration in relation to structural soundness.

Countries from the US to Kazakhstan are in a building frenzy. They are all eclipsed, however, by the greatest building site of all: China, whose appetite is so insatiable that it is gobbling up half the world’s concrete and still has room for a third of its steel for pudding.

Strange that particular buildings are thought about and engineered for long-term survival, even as the sustainability of the “insatiable” building process which brings them into being can be put to one side.