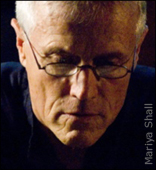 The title of Paul Hawken’s talk, “The New Great Transformation,” has two referents, he explained. Economist Karl Polanyi’s 1944 book, THE GREAT TRANSFORMATION, said that the “market society” and modern nation state emerged together in Europe after 1700 and divided society in ways that have yet to be healed.

Karen Armstrong’s 2006 book, THE GREAT TRANSFORMATION, explores “the Axial Age” between 800 and 200 BC when the world’s great religions and philosophies first took shape. They were all initially social movements, she says, acting on revulsion against the violence and injustice of their times.

Both books describe conditions in which “the future is stolen and sold to the present,” said Hawken— a situation we are having to deal with yet again….