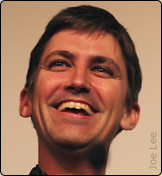 Steven Johnson began his long zoom survey with the “prior art” of Joyce’s Stephen Daedalus locating himself in himself, his neighborhood, Dublin, on out to the universe. The value of a long zoom is in identifying and employing every scale between the very large and very small, noticing how they change each other when held in the mind at the same time.

Johnson’s core story (and current book) concerned London in 1854, when it was the largest city in the world and in history with 2.5 million people…