Current Status: (updated Jan 02017) Presently our active and fully funded projects are building the monument scale 10,000 Year Clock, the PanLex project, The Interval, and the Seminar series.  The monthly Seminar series hosted by Stewart Brand is our most successful outreach project to date, and is listened to or viewed by over a hundred thousand people per month (podcast).  Revive and Restore is spinning off as it’s own non profit entity this year and we are proud to see them fledge. The first monument scale Clock project, called Clock One, is under construction in high desert of Texas.  A team of dozens of engineers, fabricators, and on site construction crew are now working on the Clock elements, and underground excavation.  We have already completed a large portion of the underground construction and some of the first full size Clock parts are now complete.

Long Now has several projects that are on “life support” which are funded from our general fund or occasional small grants.  These are projects that we would like to do a lot more with if we can find the funding.  Currently these projects include The Rosetta Project & Long Bets.  The majority of our general funding comes from private grants, and increasingly from our membership program.

We also have several projects that are now dormant due to lack of funding and resources, or have passed into other hands.  The dormant projects include  most of our digital preservation projects associated with Long Server, and The All Species Project now lives on through E.O. Wilson’s Encyclopedia of Life project.

Timeline
“This present moment used to be the unimaginable future.” – Stewart Brand

01994: Danny Hillis starts an email conversation among friends including Stewart Brand around his Millennium Clock essay.  Stewart Brand suggests that if a Millennium Clock can grab people’s attention, there should be an institution like a long-term library that can keep that attention by storing civilizationally relevant information on the same time scales. Brian Eno suggests that the Clock be called the Clock of the Long Now.

01996: Stewart Brand incorporates a new non-profit called Clock/Library organized around the idea of long-term thinking.  The group of friends in the email conversation become the board and they hold their first meeting in Sausalito, CA.  The board formalizes a set of basic guidelines and principles for a long-lived institution.

01997: The board holds their second meeting in Aspen CO to discuss Hillis’ design ideas for the Clock.  Hillis brings the first prototype of a binary mechanical adder he has designed to do calculations for the Clock.  The name of the institution becomes The Long Now Foundation.  Alexander Rose attends and is hired as the first employee and manager of the Clock project.  Hillis and Rose begin the design process for a first Clock prototype.  The first web site is created for the project by Alexander Rose, and Long Now gets a small office in The Presidio Tides Center.  Machinist Christopher Rand is hired to build the early experiments.  A second meeting was held in Aspen facilitated by Kees Vanderheijden where he clarified the Long Now strategy.

01998: Long Now has its first conference in conjunction with the Getty Information Institute on digital preservation called Time & Bits, Managing Digital Continuity. Several board members and friends go to the US Southwest looking for Clock sites.  The Rosetta Project in conceived partially at the Time and Bits conference and elaborated on this desert trip.  Roger Kennedy suggests that there may be a good Clock site in Nevada near the Great Basin National Park.  We take a trip there and meet David Tilford who shows us the site that we later end up buying. The IRS and state of California awards Long Now 501(c)3 non profit status.  Engineers Liz Woods and Kiersten Muenchinger begin working on the project.

01999: Long Now purchases 180 acres of mountain top property in eastern Nevada to be the eventual Clock site.  Long Now moves into Presidio building 116 with the Internet Archive.  Roger Kennedy and Mike Keller are added to the board. The first prototype of the Clock of the Long Now is completed moments before the turn of the new millennium at midnight. Stewart Brand publishes The Clock of the Long Now.  Jim Mason is hired to collect and build the Rosetta Disk.

02000: The first Clock prototype is shown at the TED conference.  The prototype is then shipped to London to go on display in The Science Museum’s new Making of the Modern World exhibit which is opened by the Queen in June.  Long Now holds its 10,000 Year Library Conference at Stanford Libraries.  Engineer Paolo Salvagione is hired on the Clock project and we begin work on the Orrery. Kurt Bollacker comes on as Digital Research Director. The All Species Project is launched and spun off as its own non-profit.

02001: The Rosetta Project website is launched to continue collecting more language information.  Long Now moves its offices to Presidio building 220 with All Species.  The Long Now board tours land art of the southwest including Roden Crater, Star Axis, the Lightning Field, and the Trinity Site.  The Rosetta Project discovers Lameen Souag an 18 year old Algerian-American linguistic prodigy, who then comes to work on the project.  Work begins on the Long Bets project.

02003: The monthly Seminars About Long-term Thinking series hosted by Stewart Brand is launched with a talk by Brian Eno. The Rosetta Project has its All Language Conference at Stanford and receives a $1 million grant from the National Science Foundation to increase its collection to 2,500 languages. Brian Eno releases Bell Studies January 07003 based on the Clocks bell ringing algorithm.  All Species Project goes dormant from lack of funding.

02004: An early version of the Rosetta Disk is launched on the ESA’s Rosetta Mission to land on a comet in 02014.  Laura Welcher is hired as a curator of the Rosetta Project, and Benjamin Keating comes on as sys-admin and designer. David Rumsey added to the Long Now board.

02005: The Orrery prototype is completed and debuts as a cover story for Discover Magazine. The Rosetta Project reaches its goal of collecting documentation of 2,500 languages and completes its NSF funding.  We begin work on designing the monument scale Clock, and Luke Khanlian and Jacha Little are added to the engineering team.

02006: Michael Chabon publishes his essay on the Clock Project in Details Magazine.  The Seminar series podcast is launched and the online audience grows into the tens of thousands.  The first Chime Generator prototype is completed.  Long Now moves its headquarters to Ft. Mason and opens the Museum and Store to the public on our tenth anniversary.  Greg Staples is added to the Clock Engineering team and Danielle Engelman is hired as Community Development Director.

02007: The Membership Program is launched and reaches 1,000 members in a just a few months.  The first member event, Brian Eno’s 77 Million Paintings, is held in San Francisco.  The Blog of the Long Now is started.  Kim Polese and Chris Anderson added to the Long Now board.  Laura Welcher becomes director of the Rosetta Project.

02009: In May the Clock One project begins core drilling in Texas to test rock quality for the underground structures for the Clock.  The Funeral For Analog TV event is held in partnership with UC Berkeley.

02010: Construction at Clock One begins.  In January a robotic diamond stone saw built by Seattle Solstice is tested.  It will be used to carve underground spiral stairs for the Clock.  In March the Global Lives partner project holds their world premiere and Longplayer San Francisco is held in October.

02011: Clock site construction continues in Texas.  Panlex project joins the Rosetta Project and a first run of 10 single sided Rosetta Disks is made.  The Kindle book of Seminar Summaries is published.

02012: The entry tunnel and the vertical raise bore are completed on the Clock site and cutting with the stair saw begins.  The 100th Seminar is held in January and a book of summaries is published to commemorate it.  Ping Fu joins the Long Now board.

02013: Revive and Restore launches with TEDx DeExtinction event and cover of National Geographic.

02015:  Fund of the Long Now launched, The Panlex project opens its own offices in Berkeley.

02016:  Long Now turns 20 and holds first Member Summit and first educational teachers institute on long-term thinking.  The entire back catalog of Long Now Seminar video is made available to all, an iPad app to watch them is launched, and Stewart Brand’s Summaries of the Seminars are made available on Medium.  The Rosetta Spacecraft lands on Comet 67P with Rosetta Disk on board, and the wearable version of the Rosetta Disk is released.  Katherine Fulton added to the Long Now board of directors. 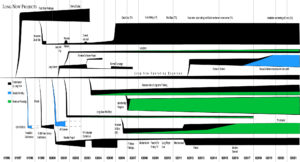