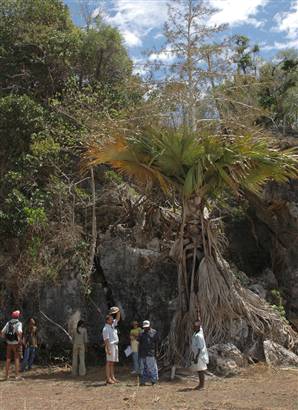 A self-destructing palm tree that flowers once every 100 years and then dies has been discovered on the Indian Ocean island of Madagascar, botanists said Thursday.
[…]
Local villagers have known about it for years although none had seen it in flower until last year.
[…]
Puzzling [author of the new study Dr. John] Dransfield is how botanists had missed such a “whopping palm” until now. According to him it is the largest palm species in the country but there appear to be only about 100 in existence.
[…]
Dransfield suggests the plant has been quietly living and dramatically dying in Madagascar since the island split with mainland India 80 million years ago.

It seems that we have here another patron plant for the Long Now, joining the long lived bristlecones atop Mt Washington.

If we must anthropomorphise such findings (and why not?), then unlike the steadfast bristlecone, whose multimillenial lifespan in the rugged environs of eastern Nevada seems to buttress the stoic contention that adversity breeds longevity, there may be an even more tragic, beautiful message here:

“It’s spectacular. It does not flower for maybe 100 years and when it’s like this it can be mistaken for other types of palm,” said Mijoro Rakotoarinivo, who works for the London botanical gardens in Madagascar.

The branches of this shoot then become covered in hundreds of tiny white flowers that ooze with nectar, attracting insects and birds.

But the effort of flowering and fruiting depletes the tree so much that within a few months it collapses and dies, said [Dransfield].